SEOUL, Jan. 24 (Yonhap) -- South Korea's three telecom operators are likely to have racked up decent earnings in 2016, helped by curbs on their marketing spending and a growth in their fixed-line Internet businesses, industry data showed Tuesday.

The combined revenue of SK Telecom, KT and LG Uplus is expected to have expanded 1.1 percent on year to 50.77 trillion won (US$43.67 billion) last year, according to the data compiled by industry tracker FnGuide.

Their combined operating profit is likely to have risen 4.7 percent to 3.8 trillion won, with their net profit estimated at 2.79 trillion won, also up 12 percent.

South Korea implemented a law in early 2015 that kept in check fierce competition among telecom firms to woo customers with hefty subsidies.

By company, KT, the No. 2 mobile operator, is forecast to report 1.46 trillion won operating profit for 2016, up 13.1 percent from a year earlier. Its sales are likely to have grown 1 percent on-year to reach 22.49 trillion won.

LG Uplus, the smallest of the three, is expected to report 730 billion won in operation income for its 2016 business year, up 16 percent from a year earlier. Sales are likely to have grown 3.6 percent on year to 11.18 trillion won.

SK Telecom's operating profit, however, is expected to have fallen 5.7 percent to 1.61 trillion won, and its sales are forecast to have edged down 0.3 percent on-year to reach 17.09 trillion won. 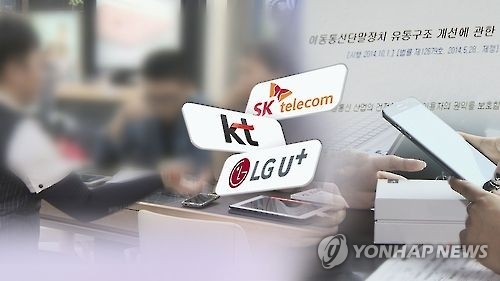