The new and improved tolling system will be built around the existing Hi-Pass system, but without the large tolling booths that inevitably create a narrow passage for cars. 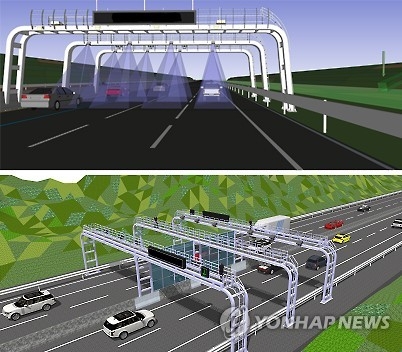 Currently, drivers using the automatic tolling system are required to greatly reduce their speed when passing through such a toll booth, as those booths also create possible obstacles.

The new system will instead only have overhead charging devices, allowing vehicles to pass through at normal speed, the Ministry of Land, Infrastructure and Transport said.

The new system will be set up on most major highways, including the Seoul-Busan expressway, by 2019.

"The new Hi-Pass system will help improve the driving safety of the country's expressways while also reducing traffic congestion," the ministry said in a press release.

The ministry said it was also moving to introduce a new tolling system for vehicles that do not have the Hi-Pass system, which will use high-resolution cameras to identify the cars' license plate numbers and charge them tolls, allowing such cars to also use expressways without having to reduce their speed.