The Lotte Giants of the Korea Baseball Organization (KBO) said Tuesday they've reacquired Lee on a four-year deal worth 15 billion won (US$12.9 million). It is the largest contract handed to a free agent in the league's history.

The 34-year-old will be reunited with the KBO club he'd played with for 11 seasons, before stints in Japan and in the United States.

"I worked hard to realize my dream of playing in the United States, and my last wish was to come back and win a championship with the Lotte Giants," Lee said through the club. "I can't wait to see the fans again. I'd like to thank the team for recognizing my value."

The hulking first baseman is a native of Busan, also the home of the Giants, located some 450 kilometers southeast of Seoul. 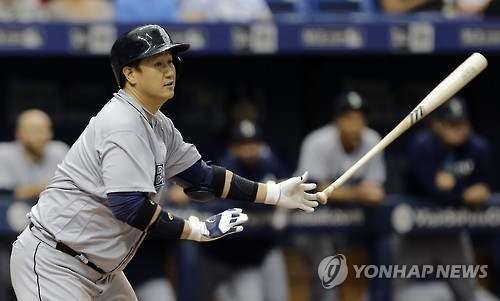 Lee was the face of the franchise during his first tour of duty with the Giants, hitting .309 with 225 homers and 809 RBIs in 1,150 games. From 2008 to 2011, Lee guided the Giants to four consecutive postseasons, and was voted the KBO MVP in 2010 after leading the league in seven major offensive categories.

He then played for two Japanese clubs, the Orix Buffaloes and Fukuoka SoftBank Hawks, from 2012 to 2015. He was named the Japan Series MVP as the Hawks claimed their second straight title.

Lee then left a lucrative offer from the Hawks on table to chase a major league job, and landed with the Mariners on a minor league contract last year. Lee worked his way on to the major league roster, and batted. 253 with 14 homers and 49 RBIs in 104 games, while platooning at first base with left-handed hitting Adam Lind.

Lee became a free agent after one season, and unable to find a club that would make him a full-time player as he'd desired, Lee decided to return to where it all began.

Lee comes to a once-proud franchise that hasn't been to the postseason since 2012. The Giants used to be the biggest draw in the KBO, leading the league in attendance for five straight seasons starting in 2008. They still own the single-season record with 1.38 million fans in 2009.

Yet their fall in the standings has caused a precipitous drop in attendance, too, as the Giants haven't topped 1 million fans since 2012.

In addition to helping revitalize the market, Lee will have to fill the void left by the departure of Hwang Jae-gyun, the slugging third baseman who on Tuesday signed with the San Francisco Giants.

Lotte has lost a few key players to free agency over the years, which contributed to the declining performance on the field and fan support in the stands. Lee was one of those departing players, and he will once again be asked to carry the club on his back.