SEJONG, Jan. 24 (Yonhap) -- South Korea's passenger car exports made a turnaround in the fourth quarter of last year for the first time in more than two years on the back of rebounding oil prices, the latest customs data showed Tuesday.

The total value of exported vehicles reached US$10.73 billion in the October-December period, up 0.2 percent from $10.7 billion a year earlier, according to the data compiled by the Korea Customs Service (KCS).

It is the first time that the quarterly figure finished in positive terrain since the third quarter of 2014, when it gained 2.4 percent on-year.

The number of units of exported cars, however, edged down 0.7 percent on-year to 769,000 in the final quarter of last year.

For all of 2016, South Korea saw its exports of passenger cars tumble 10.4 percent on-year to $36.5 billion, with the country's entire exports retreating 6.4 percent.

By country, shipments to Canada soared 46.3 percent on-year, and those to Germany and Russia jumped 10.9 percent and 38.8 percent, respectively, over the cited period.

But exports to the United States, the largest importer of South Korean cars, shrank 11.1 percent on-year, while shipments to Saudi Arabia and Britain fell 24.5 percent and 15.2 percent, respectively.

On the import front, the total value of cars brought into the country was $2.1 billion in the fourth quarter, down 20.3 percent from a year earlier. The number of imported cars also retreated 23.2 percent on-year to 67,000 units. 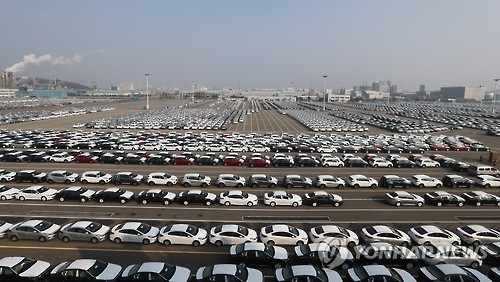