Hwang's agency GSI said Tuesday the player has inked a one-year split contract with an invitation to spring training. The deal, which will have different salary rates for the times spent in the majors and the minors, will pay Hwang US$1.5 million if he makes the big league roster, along with incentives worth up to $1.6 million.

"I am excited to have the opportunity to play in Major League Baseball, and it's long been a dream of mine," Hwang said through the agency. "Doors won't open unless you knock on them. I know very well that it won't be easy, but I'll do the best I can to crack the 25-man roster." 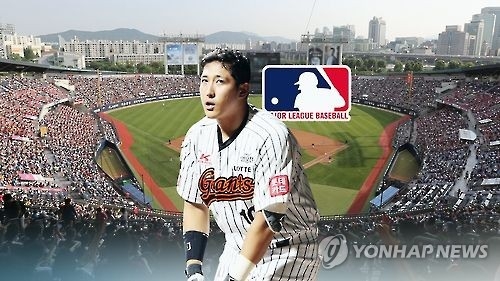 Later in a phone interview with Yonhap News Agency, Hwang said the Giants had been "the most active" club in their pursuit of his services.

"I thought I'd have more options to play for a club that really wanted me," he said. "I am lucky to be joining such a great franchise. I've wanted to play for them all along."

Incidentally, Hwang has played the past seven seasons for the Lotte Giants in the Korea Baseball Organization (KBO), and he's the first Korean player to be affiliated with both Giants.

The KBO All-Star is scheduled to depart for the United States on Wednesday.

GSI said Hwang received offers from multiple big league clubs after such a strong season, and chose San Francisco since it gave him the best opportunity to compete for the major league job.

After the KBO regular season ended in October, Hwang traveled to the United States to work out on his own, and held a showcase before interested major league scouts in Florida in November.

Earlier this month, Hwang told the Lotte Giants he wouldn't be returning, reaffirming his desire to pursue a major league contract. Another KBO club, the KT Wiz, had pursued Hwang. In the majors, the San Francisco Giants, the Milwaukee Brewers and the Detroit Tigers were reportedly interested in Hwang's services.

A gym rat listed at 183 centimeters and 96 kilograms (6 feet and 212 pounds), Hwang is the only South Korean player to make the jump from the KBO to the majors this offseason.

A San Francisco Giants official said through GSI that the club had "scouted the player heavily."

"We are excited to sign a great player out of Korea that has the potential to get better," the official said. "He will have an opportunity to compete for a starting job. Our hope is that he will come in and push other players and help us win games and get back to the playoffs."

In 2016, eight South Koreans saw major league action. From those eight, Lee Dae-ho, who played for the Seattle Mariners as a rookie, re-joined the Lotte Giants, his old KBO club, earlier Tuesday. Choi Ji-man, who made his big league debut with the Los Angeles Angels but has since been released, recently signed a minor league contract with the New York Yankees with an invitation to spring training.

If Hwang makes the big league roster, he will be the second South Korean in the National League West division after the Los Angeles Dodgers' left-hander Ryu Hyun-jin. Ryu has made just one start over the past two seasons while battling shoulder and elbow injuries. The two divisional foes will meet each other 19 times this year.

"It doesn't matter if I face Hyun-jin or whoever; the important thing is to go out and play," Hwang said.

Hwang made his professional debut with the defunct Hyundai Unicorns in 2007, a year after getting drafted out of high school. He was a shortstop early in his career but moved to third base midway through 2008, forced out by current Pittsburgh Pirates' infielder Kang Jung-ho.

After belting out 26 home runs and knocking in 97 runs in 2015, Hwang was available for posting, whereby interested big league clubs could submit their bid in a silent auction for the exclusive right to engage him in contract talks. No team submitted a bid, however, and Hwang returned to Lotte for one more season.

And he made his "contract year" count, picking just the right time to enjoy his best offensive season and parlaying it into a deal with San Francisco.