SEOUL, Jan. 24 (Yonhap) -- The San Francisco Giants have handed a one-year deal to South Korean third baseman Hwang Jae-gyun, culminating an interest that developed as far back as 2009.

Hwang signed a split contract, which will pay him US$1.5 million if he makes the 25-man major league roster after spring training. He can also make up to $1.6 million in incentives.

He made his KBO debut out of high school with the Hyundai Unicorns in 2007. The Unicorns folded under financial trouble and became what is now the Nexen Heroes in 2008.

Hwang was traded to the Lotte Giants in 2010, but according to a source privy to Major League Baseball (MLB) affairs, the San Francisco Giants first took an interest in Hwang, while he was still with the Heroes.

San Francisco may have taken note of Hwang's breakout season in 2009, when he established career highs in all major offensive categories -- with a .284 batting average, 18 home runs, 63 RBIs and 30 steals in 133 games. 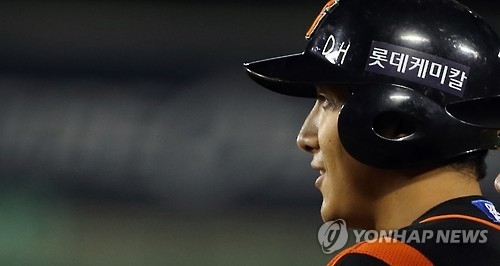 Hwang, who switched from shortstop to third base in the meantime, lost his power stroke after the trade. After that 18-homer season, Hwang's long-ball totals over the next four seasons were six, 12, four and seven. He never hit for .300 in any of those four seasons.

Hwang turned the corner nicely in 2014, batting .321 with 12 homers, 76 RBIs, 33 doubles and 17 steals. He also starred for the national team at the 2014 Asian Games, driving in the winning run for South Korea in the gold medal game against Chinese Taipei.

According to the source, a veteran scout with the San Francisco Giants began to take more serious interest in Hwang in 2014 and started viewing him as a viable utility man or a backup infielder in the majors.

He became eligible for the posting after that season, meaning he could put himself up for an MLB-wide silent auction for teams to submit bids for exclusive contract talks with him. No club put in a bid, however, and Hwang was forced to lick his wounds and return to Lotte for at least another year.

And he continued to stay in San Francisco's radar. According to another source with knowledge of MLB transactions, the Giants had "legitimate interest" in Hwang. The source said Joe Salermo, director of the Giants' international operations, contacted Hwang's camp before the player held his Florida showcase in November, saying the Giants were not only interested in seeing Hwang take batting practice and infield grounders but also meeting him away from the field.

The source said the Giants "were not shy" about their pursuit of Hwang, and it resulted in the deal announced Tuesday.

San Francisco Giants had eye on 3B Hwang Jae-gyun for years: sources

San Francisco Giants had eye on 3B Hwang Jae-gyun for years: sources