SEOUL, Jan. 24 (Yonhap) -- Days before signing with the San Francisco Giants, South Korean third baseman Hwang Jae-gyun had said his top priority was to sign with a team that gave him "the best opportunity to compete for a job."

And the Korea Baseball Organization (KBO) All-Star will likely get just that as he tries to make the Giants' Opening Day roster.

Under his one-year split contract, Hwang will make US$1.5 million if he finds himself on the Giants' 25-man roster. On top of that, he can make up to $1.6 million in incentives.

Hwang, who began his KBO career as a shortstop in 2007, switched to third base during the following season and has stayed there ever since. He has developed into an athletic, power-hitting third baseman with speed and a decent glove.

It's never easy to predict how production in the KBO -- generally regarded as somewhere between Double-A and Triple-A ball in the United States -- will translate to the majors. For what it's worth, Kang Jung-ho of the Pittsburgh Pirates went from hitting 40 home runs in the KBO in 2014 to 15 as a major league rookie in 2015. He then hit a career-high 21 last year. Park Byung-ho of the Minnesota Twins was limited to just 12 homers as a rookie in 2016, after blasting 53 home runs in the KBO the previous season. 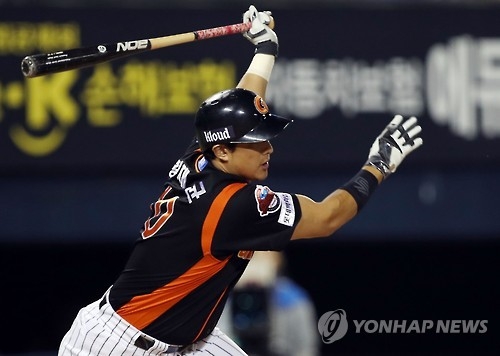 Hwang never hit 30 home runs in the KBO but did belt out 26 and 27 long balls in each of his past two seasons here.

But if he can come close to duplicating those numbers, Hwang will give the Giants better offensive production at third base than last year.

The Giants doled out nine third basemen in 2016. They scored 76 runs together, tied for the second fewest among 15 National League teams, and had just 12 homers, second from bottom.

These third basemen also ranked 14th in on-base-plus-slugging percentage (OPS) with .713 and RBIs with 61.

Eduardo Nunez, a midseason acquisition from the Twins, spent the majority of the time at third base. He batted a solid .296 with 12 homers, 47 RBIs and 27 steals in 91 games for the Twins, but managed only four homers with 20 RBIs and a .269 batting average in 50 games with his new club.

Nunez made some outfield appearances earlier in his career with the New York Yankees and then the Twins. Though he didn't take the outfield with the Giants last year, Nunez could be forced to move there if Hwang plays his way into third base consideration.

A 29-year-old journeyman Conor Gillaspie will also throw his hat into the ring in a battle for the third base job. He batted .262 with six homers and 25 RBIs in 101 games last year.

If Nunez is indeed asked to move to outfield, he may find a new home in left field, where the Giants will also need some offensive punch after the departure of free agent Angel Pagan.

Mac Williamson, a 26-year-old with 64 big league games to his credit, is listed at the top of the Giants' left-field depth chart on the club's website. He batted .223 with six homers in 54 games in 2016.

Hwang does have shortstop experience, though he's clearly not going to steal time from the Giants' two-time Gold Glove winner, Brandon Crawford.

The biggest challenge for Hwang may just come in the form of his home park. The Giants are based at AT&T Park, statistically the toughest stadium in which to hit a home run in the majors. 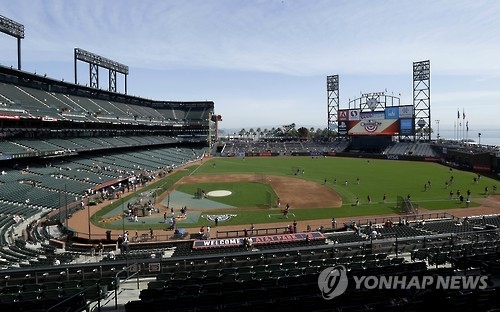 ESPN's Park Factors measures rates in runs scored, home runs and hits, among others. A rate higher than 1.000 favors the hitter, and a rate below that mark favors the pitcher.

In the home run category, the scenic stadium by the San Francisco Bay ranked dead last among 30 ballparks with 0.704.

San Francisco is noted for its gusts of wind, and though AT&T isn't affected by them as much as its predecessor, Candlestick Park, it has been no less tough on hitters.

According to a report by the San Francisco Chronicle, wind at AT&T "seems to veer off the edge of the right-field stands and blow across the foul line, sending fly balls into the deepest recesses of the outfield where they can be caught."