The short clip released Monday captivates viewers and critics alike with the spectacular sights of electrifying car chases and dynamic fighting scenes as well as its comical and imaginative aspects that poses an interesting contrast to the typical dark and cruel movies of the same genre. The excitement is heightened by the actors' flawless performances that bring the movie to life.

In the upcoming film, Ji plays Gwon-yu, a jobless young gamer who is jailed after being framed for murder but struggles to unearth the truth with help from other members of his online gaming group played by popular actors Shim Eun-kyung and Ahn Jae-hong. Shim took the lead in the 2013 box office hit "Miss Granny" and Ahn played in the popular television series "Reply 1988."

Director Park Kwang-hyun, best known for his hit comedy-drama film "Welcome to Dongmakgol" (2005) spearheaded the production, hoping many young moviegoers would empathize with the flick, as it bears a close resemblance to Korea today featuring Google's AlphaGo AI program and a plethora of cyberspace hackers.

"Fabricated City," presented and distributed by CJ Entertainment, is set to open in local theaters on Feb. 9. 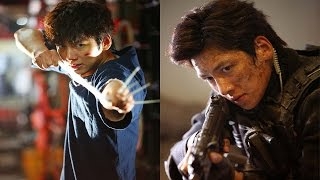