SEOUL, Jan. 24 (Yonhap) -- A Seoul court was set to decide Tuesday on the arrest of a former university chief suspected of giving admissions and grading favors to the daughter of President Park Geun-hye's close friend.

Choi Kyung-hee, president of Ewha Womans University from 2014 to 2016, is accused of helping Chung Yoo-ra gain admission to the school despite her alleged ineligibility.

An independent counsel probe has been under way to determine the truth behind the allegations that Chung's mother, Choi Soon-sil, abused her ties to the president to peddle influence and win favors. The scandal led to the president's impeachment last month.

With a decision by the Seoul Central District Court, expected for late Tuesday or early Wednesday, the investigation team led by Special Counsel Park Young-soo will wrap up the first stage of its probe into the alleged irregularities at Ewha. The team has already placed other Ewha officials, including Kim Kyung-sook, former dean of its College of Science and Industry Convergence, and professor Lyou Chul-gyun, under arrest for further questioning over their alleged special treatment of Chung.

The counsel sought Choi Kyung-hee's arrest also on suspicion of perjury after she denied being closely acquainted with Chung's mother during a parliamentary hearing. 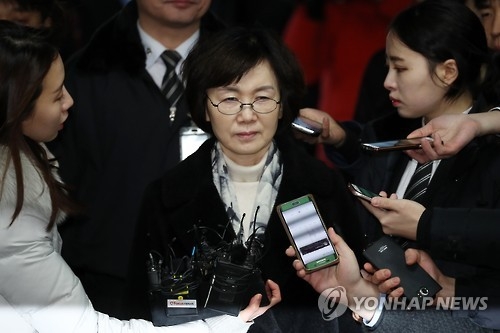