SEOUL, Jan. 24 (Yonhap) -- South Korea's main opposition Democratic Party on Tuesday decided to refer a lawmaker to its ethics panel for hosting an exhibition that included a painting portraying President Park Geun-hye in the nude.

An official from the party said the Supreme Council held an emergency meeting and decided to bring the issue to the ethics committee. It was inappropriate to display such a picture even if it was intended as satire, the official said. 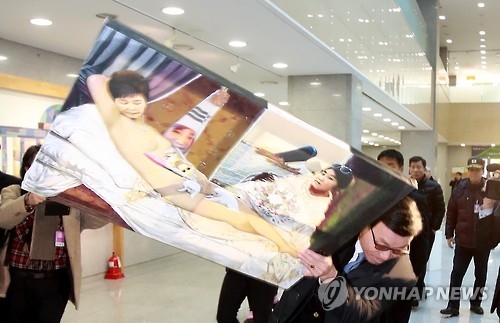 Moon Jae-in, a potential presidential candidate from the party, expressed deep regret over the exhibition.

"Arts and politics are different. In arts, criticism and satire are important but in politics dignity and restraint are important," Moon said on Facebook.

The ruling Saenuri Party denounced the exhibition as an insult and sexual harassment.

Pyo drew criticism earlier this month by claiming that there should be an age ceiling of 65 for presidents, apparently targeting former U.N. Secretary-General Ban Ki-moon, a potential conservative candidate.

In the face of criticism, Pyo said the exhibition should be respected in terms of freedom of speech, but that he will take responsibility for the controversy.

"It surely does not suit my taste. But I believe it is within the boundary of the freedom of arts," Pyo said.

The lawmaker said he did not choose the displayed works by himself. The event was organized by an artists' group, and he only requested the National Assembly to provide a venue, he added.

Pyo said he told the National Assembly that he does not have the authority to remove the picture, and that the decision is in the realm of the freedom of the artist.

"I do not intend to intervene, obstruct, oppose, or disrupt mockery, caricature, parody or satire against me," Pyo said. "In the same manner, we should respect criticism and satire of public figures including the president, politicians and other people with authority."

Later in the day some conservative protesters were taken to a police station after they damaged the picture.

Around 20 members of a civic group staged a protest against the exhibition at the parliament, with some throwing the painting on the floor. 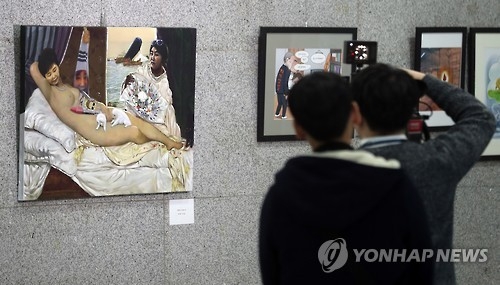