Alarmed by a series of campaign remarks by U.S. President Donald Trump that were skeptical of military alliances and trade deals with American allies and partners, Seoul has been trying to maintain close ties with Washington, its top security ally.

"I hope that the inauguration of U.S. President Donald Trump and the new government will serve as an opportunity for the two countries to strengthen policy coordination in all areas such as the economy, diplomacy, security and military, and develop a mutually beneficial (relationship)," Hwang said. 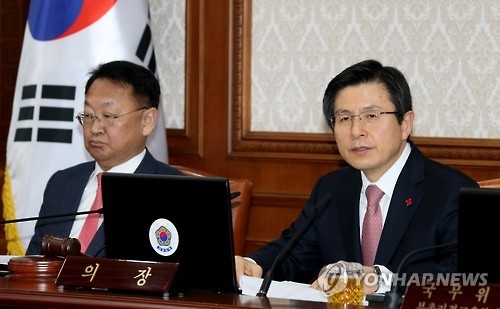 The acting president also touted the bilateral alliance as being "forged in blood" during the 1950-53 Korean War, sharing common values and playing a key role in promoting peace and prosperity on the Korean Peninsula and in Northeast Asia.

On the campaign trail, Trump made a host of speeches that questioned the economic value of U.S. security partnerships with allies like South Korea and Japan, and disparaged the South Korea-U.S. free trade agreement as a "job-killing" deal.

Observers have thus warned of policy changes, particularly about the greater sharing for the upkeep of some 28,500 U.S. troops in South Korea.