During his visit to the Korea Army Training Center in Nonsan, 213 kilometers south of Seoul, Hwang also ordered military instructors to lead efforts to improve barrack culture, which has frequently drawn flak for being too rigid and, in some cases, abusive.

"The security situation this year is very grave, and at this juncture, troops must focus on building a strong military through intensive training and mental education," Hwang said.

"I call on you to bear in mind that victory in real combat can only be achieved through intensive training," he added. 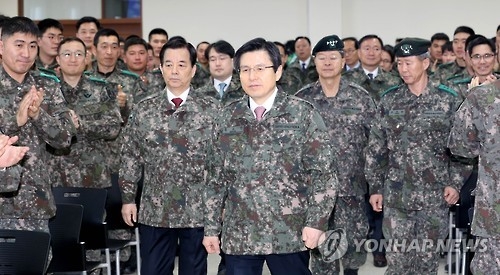 Since its creation in 1951, the Army boot camp has trained some 7.8 million soldiers. It currently trains an average of 120,000 troops each year.

Since Hwang took over as acting president on Dec. 9 after President Park Geun-hye was impeached over a corruption scandal, he has highlighted his mantle as the commander-in-chief by visiting a series of high-profile military sites such as the Seoul headquarters of the Joint Chiefs of Staff and the South Korea-U.S. Combined Forces Command.

His move to ensure tight security came amid concerns about additional provocations from the North.

Pyongyang has recently said it can launch an intercontinental ballistic missile (ICBM) at any time from any place. It, moreover, claimed it is close to mastering the technology to build an ICBM that could potentially hit the continental United States.

Meanwhile, Hwang invited dozens of upstanding public servants to his official residence for a luncheon meeting earlier in the day.

During the meeting, he called on the participants to work with "extraordinary" resolve to quickly carry out a series of state projects aimed at enhancing the well-being of citizens.