SEOUL, Jan.24 (Yonhap) -- Crowdfunding in South Korea has been half successful over the first year, data showed Tuesday, as the authorities pledged more efforts to promote the system.

A total of 18 billion won (US$15.4 million) has been raised so far from 7,172 investors to fund 121 projects, according to the Financial Services Commission (FSC).

It represents 46.4 percent of 261 proposed ideas. Each investor has provided 1.3 million won on average.

South Korea, a global tech powerhouse, introduced the equity-style crowdfunding program a year ago, which allows early stage startups to raise capital from a large number of individuals investing relatively small amounts of money, typically via the Internet.

"Crowdfunding is taking root as a new route of raising capital for startups and small and medium-sized enterprises," the FSC's chief Yim Jong-yong said at a ceremony to commemorate the first anniversary of the launch of the crowdfunding platform in the nation.

He added the government will push for the revision of related legislation to ease restrictions. 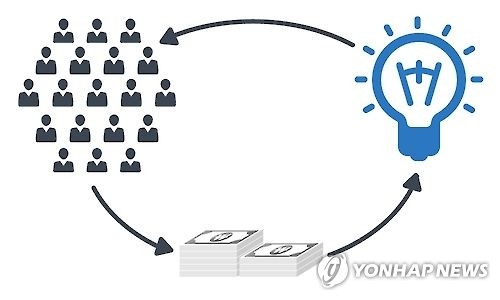