SEOUL, Jan. 24 (Yonhap) -- The air forces of South Korea and the United States are conducting a two-week joint military drill to hone their skills on rescuing downed pilots in enemy territory, the military said Tuesday.

The biannual drill comes amid growing threats from North Korea. In his New Year's address, leader Kim Jong-un said the North had entered the final stage of preparations to test-fire an intercontinental ballistic missile that could reach the U.S. mainland.

Some 130 Korean pararescuemen and 250 of their U.S. counterparts are participating in the Pacific Thunder exercise aimed at saving pilots downed in enemy territory during a mission, the South Korean Air Force said in a statement.

It kicked off in a mountainous area in Gangwon Province, about 200 kilometers east of Seoul, on Monday and will run through Feb. 3. 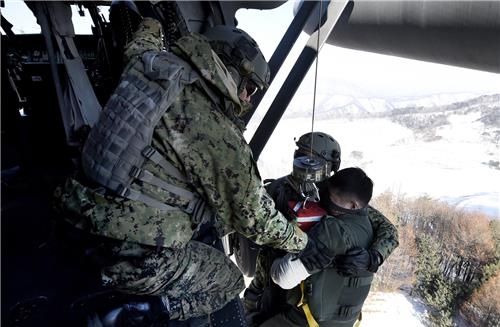 "The drill is a good opportunity for U.S. airmen to practice infiltration and rescue missions on the Korean Peninsula. It is also a very important chance for the two air forces to practice a joint rescue operation," an Air Force official said.

The South Korean Air Force joined the annual Pacific Thunder drill in 2010 after it was launched by the U.S. Air Force two years earlier. The two countries agreed to hold the drill twice a year from 2015.

Also in Gangwon Province, Marine Corps units of the two allies started a five-week drill designed to prepare its troops for combat in very cold conditions. The drill began Jan. 15 and runs through Feb. 17.