SEOUL, Jan. 24 (Yonhap) -- Ensuring South Korea's first Winter Olympics next year will deliver lasting benefits for the host city and the country will be as crucial as staging a successful competition, a veteran International Olympic Committee (IOC) member said Tuesday.

It refers to the positive impact an Olympic Games can leave on a host city by boosting sports, promoting a sense of inclusion and cooperation within communities, and fostering urban revitalization.

In his presentation titled "Why Olympic Legacy?" Schmitt discussed ways in which the 2018 PyeongChang Winter Olympics can provide benefits that will last beyond the 17-day competition.

"Olympic Legacy is a fundamental commitment of the Olympic Movement," Schmitt said. "Lasting legacy delivers lasting benefits for the community, the region and the nation."

The PyeongChang Games will take place in PyeongChang, some 180 kilometers east of Seoul, and surrounding cities in one of South Korea's least developed provinces, Gangwon.

The organizers are hoping the Winter Olympics, whose bidding right PyeongChang won on its third try, will boost its economy and tourism. Further, they're also trying to ensure the Olympic venues will continue to have viable roles in their communities after the Games, and that they will help promote elite winter sports in South Korea and the rest of Asia.

"With the Olympic Games, the host city puts itself on the map," he said. "I am coming from Europe, and without Olympic candidature, I would never have known where PyeongChang was. But now, since PyeongChang is very familiar in the Olympic Movement, the name of this region and the host city is on the map forever. This is a type of legacy that can't be underestimated." 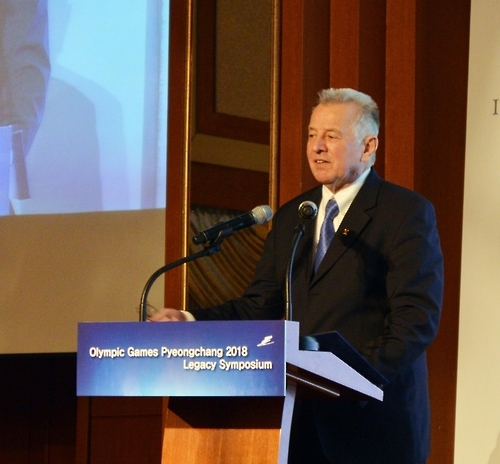 "People have started to understand why it's important for young generations to engage in sports," he said. "They are a very important tool in education."

"Sports facilities have to be sustainable and follow strict environmental regulations," he said. "From the very beginning, they have to be friendly to the environment. They must also ensure economical energy consumption in terms of heating, lighting, ventilation and air conditioning."

Also at the symposium, Tania Braga, head of legacy at the IOC, said Olympic Legacy offers "the ultimate test of 'was it worth it?'"

"By definition, Olympic Legacy is a long-term value created by the Olympic Games for people, cities and the Olympic Movement," she said. "Legacy and sustainability are becoming an integral part of the Olympic Games lifecycle management. They're discussed with candidate cities at the invitation phases and are fully embedded in the candidature process."

Braga said there is no one way to create and deliver Olympic Legacy, but "good governance" is a key to success at every Olympics.

"Olympic Legacy requires long-term changes that come in all shapes and sizes, and goes well beyond bricks and mortar," she added. "But the Olympics won't solve all the problems. Budget and governance issues are among the challenges."

In his video message at the start of the meeting, IOC President Thomas Bach said discussions on Olympic Legacy come at "an important time in preparations for the 2018 Olympic Winter Games."

"We know that the Olympic Games can be a powerful catalyst for transformation and sustainable development for cities, and create positive legacies for all citizens," Bach said. "(Olympic Legacy) is all about making sure hosting Olympic Games fits into long-term development plan for the city and region, and about organizing successful Olympic Games in a way that promote sports, human development and spread Olympic value of solidarity, friendship and respect."