Ban held a luncheon meeting with former National Assembly Speaker Chung Ui-hwa, a core figure eyeing the creation of a "third political zone," a coalition of politicians who are not anchored in the political mainstream, but can placate a widespread anti-establishment sentiment.

"(Ban) has asked (Chung) to offer support from a broad perspective," Ban's spokesman Lee Do-woon told reporters. "Chung also said he has been thinking of helping Ban in broad terms," he added. 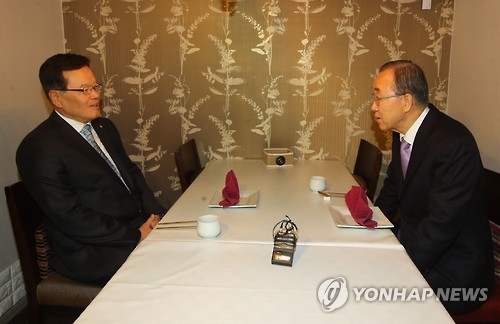 Chung later told reporters that he and Ban discussed the issue of creating the third political zone that is led by "non-hegemonic forces," a term that is often used in contrast with mainstream politicians closely affiliated with Park or Moon.

"I believe if there are good people in the zone for non-hegemonic forces, who are concerned about (the well-being of) the country, they should join hands," Chung said.

In an interview with Yonhap News Agency on Monday, Ban insinuated his support for the new political grouping, voicing hopes for "reform-minded conservatives and rational liberals" to participate.

Over the past week, Ban has met with a set of figures that could possibly join the group of non-mainstreamers, such as former Seoul Mayor Oh Se-hoon and Kim Chong-in, a former interim leader of the Democratic Party, in an apparent move to build his political base.

Meanwhile, on Tuesday morning, Ban held talks with officials from the National Council of Churches, the Christian Council and the Communion of Churches -- the major Christian groups in Korea -- as part of his drive to connect with people from various walks of life. 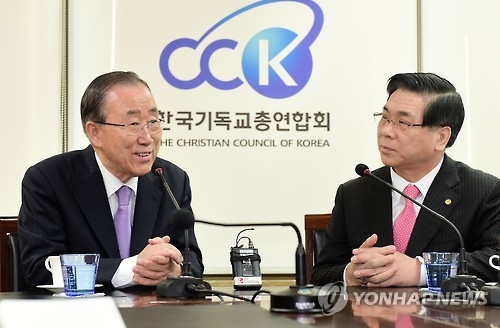 Since his return to Korea on Jan. 12 after 10 years of service as the U.N. secretary-general, he has been trying to reach out to citizens in apparent efforts to build grassroots support and boost his presidential prospects.

During his meeting with Christian leaders, Ban voiced hopes for the role of religions to heal national division, promote reconciliation and integration among Koreans and foster "wholesome spirits" among citizens.