The festival, the 14th edition this year, kicked off Jan. 14 for a 23-day run in Hwacheon, 118 kilometers northeast of Seoul.

The event was chosen as the nation's best festival by the culture ministry in 2010 and regarded as one of the world's four major winter festivals. The program "Catch Sancheoneo With Your Bare Hands" has been one of the biggest contributors to making the festival a global winter event. Sancheoneo is a type of mountain trout. 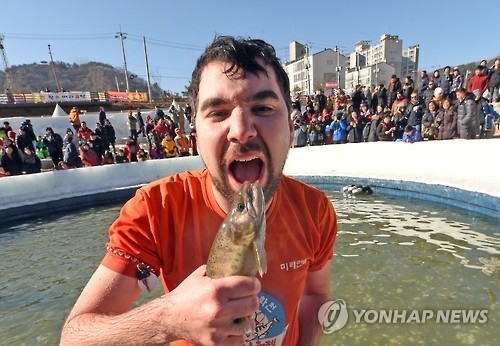 This year the small county bordering North Korea is trying to get more tourists to stay longer than a day in efforts to boost its economy. To that end, it provides a variety of nighttime programs, including the opening of Seondeung Street, which is full of beautiful lights, night fishing and figure skating.

Street parades are held on Seondeung Street every Friday and Saturday.