SEOUL, Jan. 24 (Yonhap) -- Seoul Mayor Park Won-soon reiterated his ambition to run for president on Tuesday, touting his experience in spearheading reforms as an administrative chief and grassroots activist.

During a meeting with foreign correspondents based in Seoul, Park, affiliated with the main opposition Democratic Party, said South Korea needs a "competent innovator" as its leader.

Moon, who served as chief of staff to late former President Roh Moo-hyun, gained popularity as he is considered to have inherited Roh's legacy.

But he is undeterred by his dismal performance, saying South Korean politics are unpredictable.

Park also expressed confidence against Lee, boasting his experience of leading the capital city with a population of 10 million.

The mayor also gave details on his vision for diplomacy and security policies, expressing opposition against the deployment of the Terminal High Altitude Area Defense (THAAD) system in the country. Park said experts are unsure of its effectiveness on tackling North Korea's nuclear provocations. The Seoul mayor also expressed concern over the conflict with Beijing, which has been strongly protesting the deployment.

On the sharing of the defense budget with Washington, Park said South Korea is already paying enough. U.S. President Donald Trump earlier claimed Washington's allies, including Seoul, are not covering enough of the budget for its overseas troops.

Park said he is also open to re-negotiate the Seoul-Tokyo agreement on Japan's wartime enslavement of Korean women during World War II. South Korea and Japan reached a deal in December 2015, where Tokyo agreed to provide 1 billion yen (US$8.84 million) for the creation of a foundation aimed at supporting the sexual slavery victims, euphemistically called comfort women.

The opposition bloc claims the agreement was reached without consent from the victims and that Japan still refuses to recognize its legal responsibility and the government's involvement in the forceful recruitment of the women. 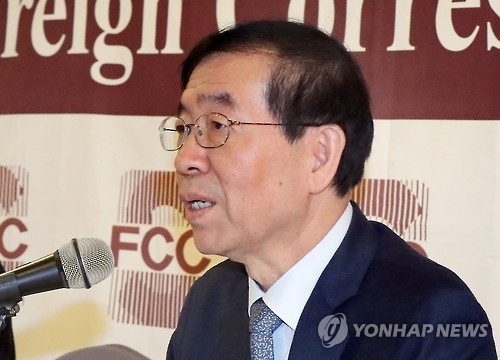