SEOUL, Jan. 24 (Yonhap) -- The head of the country's small and medium-sized enterprises (SMEs) on Tuesday called on the government to launch a Cabinet-level agency to help SMEs pursue innovation and corporate restructuring independently of big businesses.

The Small and Medium Business Administration (SMBA), led by a vice minister-level official, currently is in charge of SME-related affairs.

"The SMBA has its own limitations in the effective implementation of SME policies as it lacks the right to map out a comprehensive policy, introduce legislation and coordinate differences from government agencies," Park Seong-taek, chairman of the Korea Federation of SMEs, told a news conference. "The Ministry of Trade, Industry and Energy actually pursues policies focused on big businesses."

Park stressed the need for the government to push ahead with a corporate restructuring to help SMEs stand on their own feet and make inroads into the global market.

"The government should speed up the process for the restructuring of insolvent shipbuilding and shipping firms so the limited financial resources could be funneled into SMEs, new growth engines and the service industries," he said.

Park released a recent survey outcome in which 52.3 percent of 300 SMEs polled said they were dissatisfied with the government's SME policies carried out for the past four years under the Park Geun-hye administration.

A majority (52.7 percent) of those surveyed called on the government to protect SME business territories and help enhance SME's competitiveness while 42.7 percent wanted stricter punishment of unfair trade, according to the poll.

About 41 percent wanted the government to help SMEs secure manpower and 22.3 percent asked for help for their initiative for making inroads abroad. 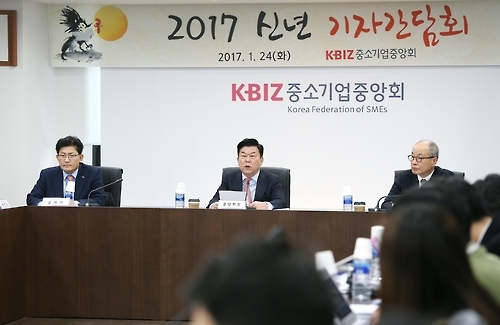