SEOUL, Jan. 25 (Yonhap) -- Suzy, a member of South Korean girl group missA, released the music video for "Yes No Maybe," the lead single off her first EP "Yes? No?" on Tuesday, according to her label JYP Entertainment.

She previously released the first single "Pretending to be Happy" as a sneak peek for the EP on Jan. 17, and the single peaked at number one on most of the domestic charts.

"Yes No Maybe" was written and composed by Park Jin-young, the founder and CEO of JYP, and gifted composer Kairos.

The track is a narrative that was first conceptualized by Park as he got inspiration from Suzy's personal story told while they were drinking wine once. Consequently, another made-by-JYP opus was characterized as a hybrid of the story of a 23-year-old girl and inspiration of 45-year-old man.

Its accompanying video was filmed in Hong Kong at the end of last year and is inspired by Chinese motion pictures of the 90s, including Hong Kong director Wong Kar-wai's films "Chungking Express" (1994) and "Fallen Angels" (1995). Particularly, Suzy's frame of mind -- frustration (possibly intoxication) -- is portrayed through Wong's then-cutting-edge style employing shots purposely taken out of focus by a hand-held camera and stop-motion jumps to produce a psychedelic visual.

Suzy captures attention of viewers by exhibiting melancholy and exotic vibes over the emotionally rich vocals in the background. 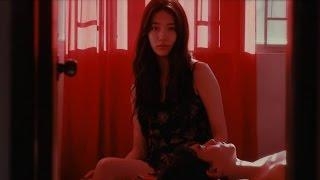