Tami Overby, senior vice president for Asia at the largest U.S. business lobby, made the remark during a discussion at George Washington University, a day after Trump signed an executive order pulling out of the 12-nation trade deal, known as the Trans Pacific Partnership (TPP).

The withdrawal, which was one of Trump's key campaign promises, underscores his protectionist stance on trade, along with his repeated promises to renegotiate the North American Free Trade Agreement (NAFTA), spurring concern about the fate of the pact with Korea, known as KORUS FTA.

"The U.S. business community still believes that the KORUS FTA is a gold standard agreement. It is the highest free trade agreement America has in force today, and that's really important in a part of the world where the rules are not always clear," Overby said. "In Asia, it's a challenging place to do business, especially now that we have officially withdrawn from the Trans Pacific Partnership. The KORUS FTA is going to be even more important." 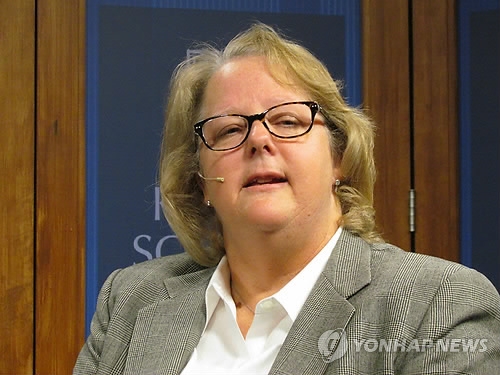 During the campaign, Trump blamed free trade deals as a key cause of job losses and other American economic problems in an attempt to woo voters struggling with economic difficulties. Since taking office, Trump also made protection of American workers and companies from foreign competitors his No. 1 priority.

On Monday, Trump promised to make the U.S. a better country to do business with by massively cutting taxes and regulations. But he also warned against moving companies overseas, saying such firms will face a hefty border tax on products they're bringing back into the country.

These remarks spurred concern as to what he would do about the pact with South Korea, which he strongly denounced on the campaign trail as a "job-killing" deal and a "disaster," even though he has made no public mention of the deal since the election.

Overby rejected criticism of the pact.

"We find the KORUS FTA as a success. It is an important complement to our bilateral defense treaty that our countries share," she said, adding that it is an "inaccurate statement" to portray the U.S.-Korea FTA as a job-killing deal.

"It's an inaccurate statement. Look at wage costs in South Korea comparative with the U.S. and you will see a relative equal amount," she said.

The deal, which went into effect in 2012, has been viewed as an economic alliance between the two countries. The U.S. International Trade Commission (ITC) said in a report last year that it has been good for American interests, saying the agreement is estimated to have improved bilateral merchandise trade balances by $15.8 billion in 2015

Overby accused Trump and other politicians of using trade as a scapegoat for broader concerns about stagnant wages, income inequality and job losses in manufacturing at a time when trade should rather be a bigger part of the solution to the problems.

"Simply put, we've got to start telling the truth on trade," she said.

Jobs have been lost not because of trade, but because "productivity, technology, innovation, new business models have disrupted traditional industries," she said.

"It's a whole new world out there and the result is America is more productive than we've ever been but we need far fewer employees to produce the same amount of goods. This trend is only accelerating with the use of robots and artificial intelligence," she said.