Samsung Electronics, the head of the pack, on Tuesday announced last year's operating profit at 29.2 trillion won (US$25 billion), the fifth consecutive year of a sum nearing 30 trillion won. Cash and cashable assets totaled 88.2 trillion won, a record for the IT giant after increasing by close to 17 trillion won from a year ago. The company also announced a 2016 dividend of 27,500 won per share, amounting to about 3.8 trillion won in all.

Corporate tracker FnGuide, in its analysis as of the end of the third quarter last year, showed a similar increase in cash holdings by other big companies, which are calculated by combining after-tax operating profit and depreciation cost and subtracting investment spending from it. Data on listed affiliates of the country's top 10 business groups said Hyundai Motor held 7.57 trillion won in cash and cash equivalents, up 17.18 percent from a year ago. Kia Motors showed an even bigger 57.79 percent increase to 2.56 trillion won. 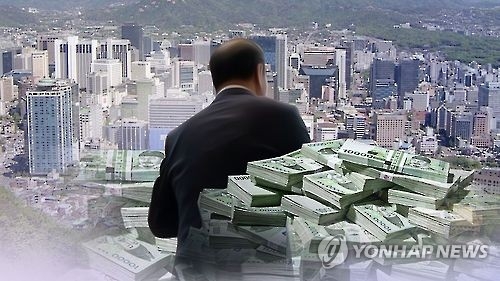 For Hyundai Engineering & Construction, such assets increased 9.02 percent to 2.34 trillion won. At SK hynix, they reached 1.21 trillion won for a 137.88 percent jump, while for LG Electronics, they marked a 17.8 percent rise to 3.48 trillion won.

At Hyundai Heavy Industries, the cash pile was nearly 40 percent higher than a year ago, with 4.2 trillion won.

NH Investment & Securities said shareholder dividends for 2016 could set a record, with companies listed on the main bourse KOSPI raking up more than 100 trillion won in net profit combined.

"Corporate profits have jumped to their highest level since the financial crisis (of 2008)," Kang Song-chul of NH Investment said. "In terms of investment, we need to closely watch the cash reserves of the companies, their improvement in corporate governance and returns to shareholders."
(END)