SEOUL, Jan. 25 (Yonhap) -- South Korea and the United States are arranging their first defense ministers' talks in Seoul next month since the inauguration of Donald Trump, the defense ministry said Wednesday,

U.S. Defense Secretary James Mattis reportedly plans to visit Japan and South Korea in his first overseas trip after he was named to head the Pentagon.

"We are in talks with our U.S. counterparts to hold the defense ministers' meeting early next month in Seoul. We are fine-tuning the detailed schedule," a ministry official said.

They are also likely to reaffirm the plan to deploy the THAAD advanced missile defense system in South Korea this year to defend against the North, he said.

Observers say the cost-sharing for U.S. Forces Korea may also be on the agenda as Trump called for U.S. allies to pay more for the upkeep of the U.S. military during his election campaigning.

In a recent message sent to the Department of Defense, Mattis said, "Recognizing that no nation is secure without friends, we will work with the State Department to strengthen our alliances." 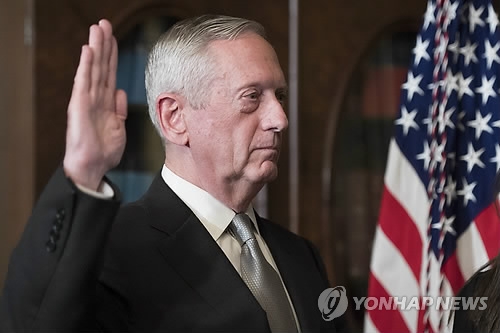