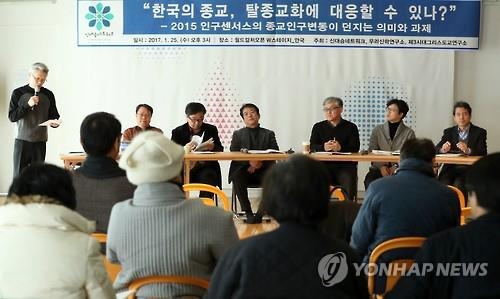 SEOUL, Jan. 25 (Yonhap) -- Korean Buddhism's monk-centric culture may be a major reason behind a steep drop in the country's Buddhist population in the last decade or so, a religious expert argued Wednesday.

"Many people consider Korean Buddhism a religion for monks. In Buddhist jargon, it's called monk-centric religion," said Park Soo-ho, a researcher at the Joong-Ang Sangha University's Institute of Buddhist Social Science at a pan-religion forum held in central Seoul. "On the outside, (the religion) claims to be a public communion, but in reality the orders are operated heavily around monks."

The South Korean religious landscape has undergone a substantial change in the past decade or so, with the biggest consequential shift being a drop in the number of Buddhists.

The number of Buddhists as of 2015 stood at 7.61 million as of late 2015, down 2.96 million compared to a decade ago, according to Statistics Korea's latest census data.

Buddhists formed the largest single religious group since the government's first census in 1985. But they fell behind Protestants, which grew by 1.23 million to 9.68 million during the same period.

Park suggested that Buddhist orders reform and modernize their management to allow for more openness, tackle wealth polarization in temples and better reflect on how they are serving the religion's practitioners.

Monk-centric culture may be reason for Buddhist decline in S. Korea: expert

Monk-centric culture may be reason for Buddhist decline in S. Korea: expert