SEOUL, Feb. 1 (Yonhap) -- The government said Wednesday that it will double research and development (R&D) spending on the local service sector in five years in search of a new growth engine, amid a deep slump in the manufacturing sector.

The Ministry of Science, ICT and Future Planning said it will pour an R&D budget of 1.25 trillion won (US$1.07 billion) into the service sector, including software, medicine and tourism industries, in 2021, compared to 664.7 billion won allocated for this year.

The plan was finalized during a government meeting presided over by Finance Minister Yoo Il-ho, the ministry said.

Under the plan, the government will also give higher tax rewards and R&D incentives to the service sector in an effort to transform the nation's manufacturing-oriented economy. 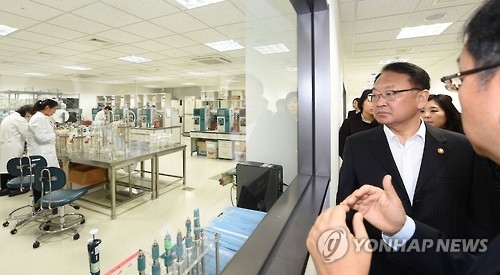 "The manufacturing industry -- which has been the engine of South Korea's economic development in the past -- led to less understanding of the importance of R&D in the service sector," Hong Nam-ki, vice-minister of ICT ministry, told reporters. "The government will make all-out efforts to bolster the fast-growing service industry in a bid to seek a new growth engine and to create more jobs eventually."

South Korea's manufacturing sector, directly affected by exports, accounts for nearly 30 percent of the country's gross domestic product (GDP) during the 2010-2015 period. However, the sector's employment rate hovers around 17 percent in recent years, lagging far behind its GDP contribution.

The software, medicine and tourism industries that are considered as new growth engines will be subject to the government R&D plan, the ministry said.

The ministry said it aims to increase the ratio to 13 percent by 2021 to shift its R&D focus from the manufacturing sector to service businesses.

S. Korea to jack up R&D spending on service sector

S. Korea to jack up R&D spending on service sector