SEOUL, Feb. 1 (Yonhap) -- The real estate market is where legal experts have an edge in dealing with various transactions, said a lawyer who has been embroiled in a controversy after setting up a real estate agency here.

Under the country's law, brokerage services are reserved exclusively for licensed realtors.

The Korea Association of Realtors brought criminal charges against him in March for allegedly brokering real estate deals without a license, but Kong claimed that he just offered legal services related to transactions and did not get paid for brokerage services.

In November, a local court ruled in favor of Kong, paving the way for more lawyers to tap into the market.

"I was sure I could win the case," Kong said in a recent interview with Yonhap News Agency at his office in southern Seoul. "This is a well-designed business model.

"In the past 15 years, I moved about 10 times," he said. "As I went through the transactions as a customer, I came to think that realtors were not professional enough in terms of legal issues, especially when we think about the commissions they get."

In South Korea, consumers usually pay 0.5 percent on real estate transactions valued between 600 million won (US$515,000) and 900 million won. If a customer purchases a property valued at 900 million won or more, the broker can be paid more in the form of a special commission worth several million won.

Kong's agency set commission fees at the maximum of 990,000 won.

"In South Korea's case, most houses out in the market are apartments in standardized forms," he said. "It seemed very odd to me that realtors get paid more in line with the price of a house, not based on how tough a negotiation process was."

Kong said his agency is specialized in carrying out due diligence on legally complicated issues. Every transaction made under his agency goes through this legal analysis and risk assessment process.

"This is more or less what I have been doing as an M&A lawyer in the last 10 years," he said, adding the change is only from selling a company to selling a house.

Kong points to the fact that the country's real estate market is comprised of individual realtors as a reason for high commission fees and a lack of professionalism.

"There are law firms for lawyers, accounting firms for accountants and patent law firms for patent attorneys, which allow each field to become more specialized and systematic," he said. "But there are only individual realtors in this real estate market, which makes it impossible for them to reach operational efficiency."

The head of the 12-member company struggling to find its position in the market said his goal is to hire some hundreds or even thousands of lawyers in the long term. The company currently has two attorneys, including Kong himself.

The online-based service is currently available only in Seoul and the surrounding Gyeonggi Province, but Kong said he aims to provide his brand of service nationwide in the future.

The latest court's ruling and Kong's move have been welcomed by many lawyers who have long been struggling with a saturated legal service market. The number of attorneys in the country surpassed the 20,000 mark in September 2014.

Yet, the situation is no different in the real estate market, with the number of realtors reaching a record high of 90,000 in 2015, according to government data.

Market observers say this is a turf war between realtors and lawyers with no easy exit. But Kong, who is awaiting an appeals court's ruling on the legitimacy of his business, seems rather calm amid the fuss.

"In the end, this is the fate of professionals," he said. "It is a matter of who can earn the clients' trust and only those who are chosen by the clients will survive in the market." 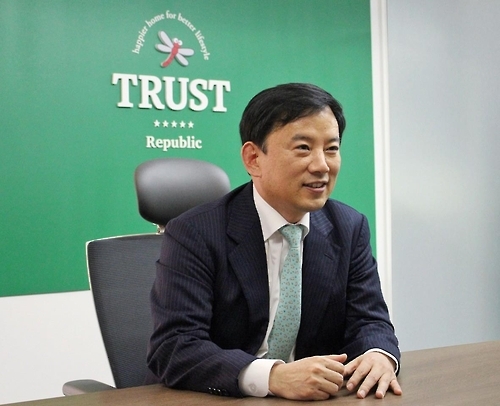