ABOARD ROKS DOKDO, Feb. 1 (Yonhap) -- Two 'Wildcat' maritime helicopters stood ready to take off from the deck of the amphibious landing ship Dokdo, with a third one on standby on a frigate in a naval drill in South Korea's southern sea off Geoje Island on Wednesday morning.

With scores of reporters watching from the 14,000-ton amphibious ship's bridge, the three AW-159 Wildcat choppers flew one by one to show how they work together with frigates or maritime patrol aircraft to detect and attack enemy submarines.

During the drill, an AW-159 chopper lowered its low-frequency dipping sonar system into the waters several times. Another chopper dropped several sonobuoys, which are still a mainstay of submarine hunters.

The AW-159 chopper is the Navy's only helicopter equipped with a low-frequency dipping sonar system, he said. 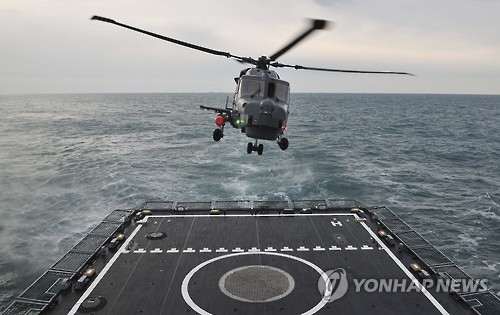 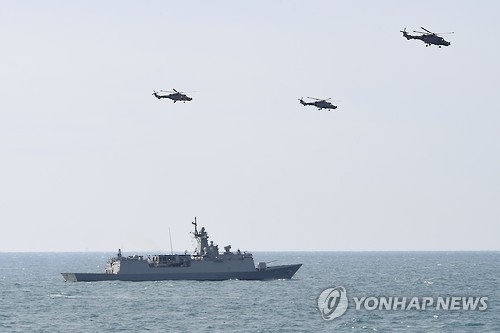 On Wednesday, the Navy deployed four AW-159 choppers after months of training and testing programs for pilots and engineers.

The AW-159 choppers have more advanced detection abilities than Lynx helicopters, he said.

The four rotary aircraft are part of eight AugustaWestland machines that were delivered to the Navy last year as part of the military's broader plan to add a total of 20 new maritime choppers to its fleet by 2022. The remaining four are to be deployed July, the Navy said.

The military plans to invest about 900 billion won (US$768 million) to purchase 12 additional maritime choppers for future service in the Navy. The three models being considered are the Wildcats, Sikorsky's MH-60R, and NHIndustries' NH-90.

It aims to sign a deal with one of the three chopper companies by the end of 2018, and the new choppers will be gradually deployed from 2020 through 2022, according to the Defense Acquisition Program Administration.

AW-159 choppers are equipped with active electronically scanned array (AESA) radar and sonar to detect submarines, plus they can be armed with anti-ship guided weapons, torpedoes and guns. The high-tech radar has a range of up to 360 kilometers.

Maritime choppers such as the AW-159 and Lynx are capable of carrying out a joint operation with surface vessels and the P-3 maritime patrol aircraft to detect enemy submarines, according to the Navy.