WASHINGTON, Jan. 31 (Yonhap) -- An armed conflict on the Korean Peninsula can no longer be contained only to the area as North Korea's long-range missile capabilities could threaten the continental U.S., the top U.S. military official said.

Marine Corps Gen. Joseph Dunford, chairman of the Joint Chiefs of Staff, made the remark in a message to the latest edition of the Joint Forces Quarterly, a National Defense University magazine, stressing that military decision-making needs to exceed the speed of events.

"There was a time, not long ago, when we planned for a conflict that might be contained to the peninsula. But today, North Korea's intercontinental ballistic missile, cyber, and space capabilities could quickly threaten the homeland and our allies in the Asia-Pacific region," Dunford said.

"Deterring and, if necessary, defeating a threat from North Korea requires the Joint Force to be capable of nearly instant integration across regions, domains, and functions," he said.

"This means more than just fielding cutting-edge technologies that ensure a competitive advantage across all domains — something we must continue to do. Keeping pace with the speed of war means changing the way we approach challenges, build strategy, make decisions, and develop leaders," he added. 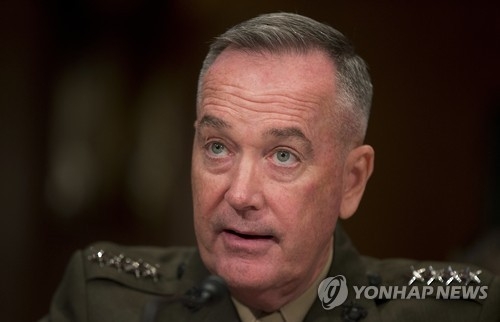