The 36-year-old writer-cum-painter made a reservation for the Model 3, launched on March 31, as it generates no emissions, comes with greater per-charge range capabilities and sells for an affordable US$35,000.

"I love eccentric but genius CEOs and their innovative products. Of course, the biggest reason I joined the queue for Tesla's Model 3 is that it is an environmentally friendly and sustainable transport solution," Kim, mother of two preschoolers, said in an interview with Yonhap News Agency.

In the unveiling last year Elon Musk said: "There are 53,000 deaths per year in the U.S. alone from auto emissions. To address this, Tesla came up with its secret master plan, a four-part trilogy," citing an MIT study. The four-part trilogy refers to the U.S. automaker's four all-electric cars -- The Roadster, Model S, Model X and Model 3.

Globally, Kim is among more than 400,000 early adopters who initially paid $1,000 to own the Model 3, the latest offering by Elon Musk aiming to bring fully electric vehicles to the mass market and send humans to other planets.

In South Korea, she represents an emerging group of customers who think electric cars will become mainstream as the world will inevitably have to resolve worsening environmental problems. 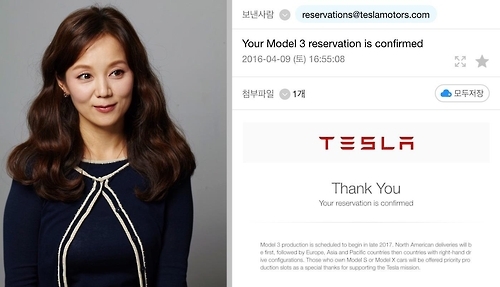 Data show that South Korea is definitely a growing market for electric vehicles.

The number of pure electric cars sold here more than doubled to 5,753 units last year from 2,821 a year earlier. The figure falls far short of 84,275 units sold in the United States last year and 14,257 sold in Japan during the January-October period. But Seoul is rapidly catching up, according to the Ministry of Environment.

This year, Seoul expects to sell 14,100 all-electric cars, driven by government subsidies of at least 14 million won (about $12,000) per vehicle and improving charging infrastructure.

"As a recent McKinsey report pointed out, consumer demand is starting to shift in favor of electrified vehicles."

Electric vehicles accounted for 0.4 percent of the country's domestic car sales of 1.6 million units last year. The ratio will grow gradually as the government plans to increase the number of slow charging stations to 20,000 this year from the current 9,200 and that of fast chargers to 2,600 from 750 during the same period, the ministry said.

But a lack of infrastructure may remain an obstacle for the spread of electric vehicles. Many potential buyers and current users want to see more charging points when they travel around the country.

Choi Sue-young, a 39-year-old private wealth manager at KB Kookmin Bank, is a case in point. She has driven BMW AG's i3 to go to and from work the past two years without leaving Seoul at all.

"The i3 can run up to 132 kilometers on a full charge of three hours. But it has limits. If I could find charging points in every corner of the country, I'd be happy to drive long distances with the car," Choi said. 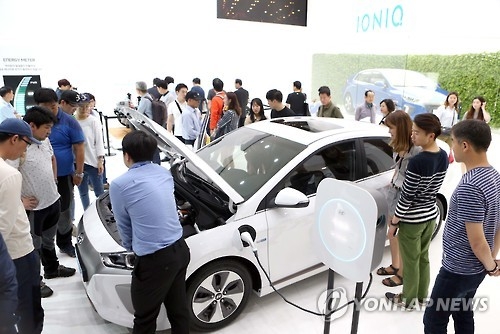 "Once the charging infrastructure is established, electric vehicles will become a major trend as the Internet and smartphones did," he said. "Carmakers need to place a more diversified product lineup in the market at reasonable prices."

Currently, the South Korean electric car market is dominated by the Hyundai-Kia automotive group, the world's fifth-largest carmaker by sales.

With its models, such as the Ioniq Electric, the Soul EV and the Ray EV, the Korean carmaker competes with BMW AG's i3, General Motors Co.'s Spark EV, Nissan Motor Co.'s Leaf and Renault Samsung Motors Co.'s SM3 Z.E. BYD, China's largest seller of electric vehicles, looks set to enter Korea due to its growth potential.

Hyundai's Ioniq, the country's first mass-produced electric vehicle, can run 191 kilometers on a full charge. The carmaker plans to launch a 320 km car in 2018 to compete with larger-capacity battery vehicles, such as Tesla's Model S 90D, which can run 472 km.

The addition of Tesla's lower-priced Model 3 and GM's Chevrolet Bolt EV in the market this year is expected to not only further fuel competition among players but also stimulate pent-up demand among consumers for electrified vehicles. 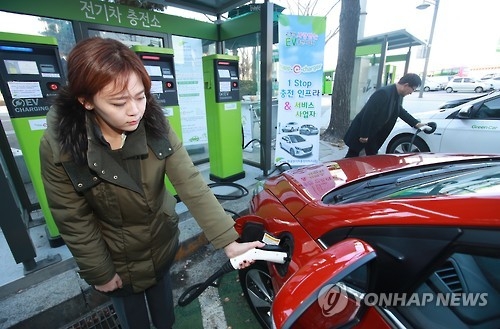 Provincial governments were quick to join hands with Tesla to stimulate their lackluster local economy by linking auto parts companies to the global electric carmaker.

The Jeju government has been at the forefront of the electric initiative. Jeju aims to replace its nearly 400,000 registered vehicles with all-electric ones by 2030 under its "Carbon Free Island" project.

Major cities, such as Busan, Daegu and Ulsan, are set to follow suit. In particular, the Daegu government is seeking a breakthrough in its slowing economy through a partnership with Tesla based on its years of investments in infrastructure for electric vehicles.

"We hope a partnership with Tesla will allow local companies to supply auto parts to the U.S. company," a Daegu government official said without elaborating.

Tesla didn't reply to emails asking at what stage it is in their strategy to enter the Korean market.

Tesla is scheduled to open its first showroom at Starfield Hanam, the country's biggest shopping mall, located just east of Seoul. But it has yet to receive the sales license from the government to start sales here.

It is likely to receive the license by the end of this month, the transport ministry said.

Once the license is given, the Californian company reportedly plans to build 25 charging points in department stores, discount store chains, outlets, hotels and Starbucks coffee outlets operated here by retail conglomerate Shinsegae Co. by the first half of 2017.

It also plans to install high-voltage "superchargers" in cities like Seoul, Busan and PyeongChang to allow charging times to drop to minutes instead of hours.

"I may have to wait for more than a year before the Model 3 is delivered. But I'm thrilled with the thought of driving the emissions-free car," Kim said.