SEOUL, Feb. 1 (Yonhap) -- South Korea's National Assembly is set to open a one-month extraordinary session on Wednesday to deal with a range of controversial issues including lowering the minimum voting age.

The voting age may figure prominently in the extra session as the proposed change could influence the results of an upcoming presidential election, which will be held earlier than expected if the impeachment of President Park Geun-hye is confirmed by the Constitutional Court.

Park was impeached by parliament in December over a corruption scandal surrounding her and her confidante Choi Soon-sil.

If the opposition parties' proposal to lower the minimum voting by a year to 18 is implemented, it would increase the number of eligible voters by some 610,000.

As younger voters are normally more supportive of liberal candidates, the conservative bloc has been reluctant to accept the proposal. 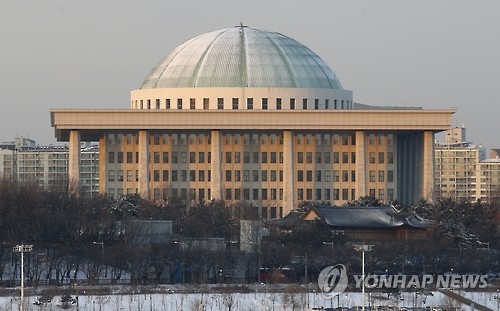 Parliament to kick off extra session

Parliament to kick off extra session