Gen. Lee Sun-jin, the chairman of the JCS, stressed the need to strengthen deterrence against North Korea's growing nuclear and missile threats during his phone talks with his U.S. counterpart Marine Corps Gen. Joseph Dunford, the military said.

"They determined that an acute security situation exists like North Korea's nuclear and missile program," the JCS said. "The talks were also aimed at reaffirming the strong commitment of the two countries to building up a joint defense posture as the new U.S. administration takes control."

The military said that Lee stressed the importance of implementing goals set by the first Seoul-Washington joint defense cooperation talks held in December. 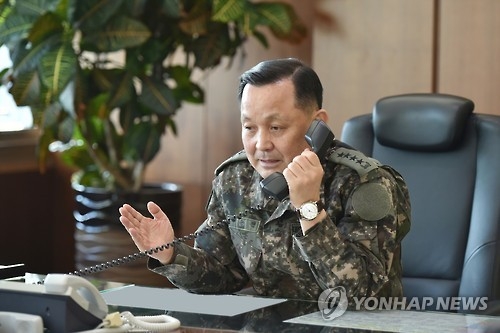 South Korea and the U.S. held their first meeting of the Extended Deterrence Strategy and Consultation Group (EDSCG) in Washington last year, a move aimed at pressuring North Korea.

During the talks, they reaffirmed the commitment of the U.S. to regularly deploy U.S. strategic assets to South Korea to better counter North Korea's threats.

The JCS did not clarify whether Lee made an appeal for the U.S. to send strategic assets to the South. But there is speculation that the issue might have been touched on ahead of new U.S. Defense Secretary James Mattis' planned visit to South Korea this week.

Mattis, who will visit Seoul on Thursday and Friday, chose South Korea as his first overseas trip since he took office.

Topics for talks between Defense Minister Han Min-koo and Mattis reportedly include the issue of whether Washington will deploy its strategic military assets to South Korea on a regular rotational basis.

But there are calls among South Koreans for the permanent deployment of U.S. strategic arms as they believe one-off deployments are not sufficient enough to counter the North's threats.

During the last EDSCG meeting, Seoul raised the need for permanent deployment of key strategic assets, but the two sides failed to reach an agreement on the point, according to sources.

North Korea has bolstered its war rhetoric as its leader Kim Jong-un said in his New Year's message that Pyongyang has entered the final stage of preparations to test-fire an intercontinental ballistic missile.

The two military chiefs then assessed that North Korea could carry out strategic provocations in an effort to advance its nuclear capabilities, according to the JCS.

The military also estimated as a possible timeframe sometime in March and April when Seoul and Washington hold their annual joint military drills, which Pyongyang has denounced as a rehearsal for a northern invasion.

"As North Korea is not likely to change its course in 2017, there is the need to maintain strong pressure against it," the JCS said.