INCHEON, Feb. 1 (Yonhap) -- South Korean baseball slugger Choi Jeong had the best season of his career in 2016 in terms of power production, and he'd like nothing better than to duplicate that success in the new year.

The SK Wyverns' third baseman tied for the Korea Baseball Organization (KBO) lead with 40 home runs, and knocked in 106 RBIs. Both totals were career-highs by a mile -- previous bests were 28 homers and 84 RBIs -- and more significantly, Choi played in 141 of the team's 144 games. He'd only played in 81 and 82 games in each of the two previous seasons due to assorted injuries.

As his club departed for their spring training site in Florida on Wednesday, Choi, 29, said he hopes to stay healthy for the 2017 season, too.

"I won't be chasing individual titles, and my goal is to again play a full season without getting hurt," he told reporters at Incheon International Airport. "It'd be nice to hit more home runs than last year, but I don't usually go up to the plate looking to hit one out."

Choi said he does want to improve his batting average. He batted .288, his lowest in a full season since 2009. In yet another offense-happy season across the league, 40 hitters batted .300 or higher in 2016. 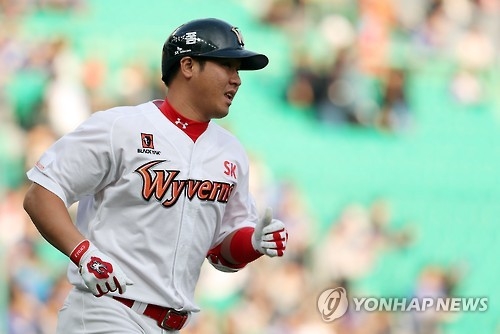 "I want to have a more consistent season than last year," said Choi, a career .292 hitter in 12 KBO seasons. "I want to make sure I have similar power production and hit for a higher average."

Despite Choi's heroics at the plate, the Wyverns missed out on the postseason. The club parted ways with its manager Kim Yong-hee, and signed former Kansas City Royals skipper Trey Hillman.

It was only one of several offseason moves the Wyverns made with an eye on the postseason in 2017.

"I am a bit more nervous about this year's camp than last year," Choi admitted. "We have a new manager and the team will undergo changes. It feels great (to leave for spring training)."