The number of Chinese visitors opting for South Korea as a tourist destination during the holiday season from Jan. 27 to Feb. 2 is forecast to have decreased between 20 and 50 percent compared to last year, the agencies said.

"There are internal talks that the number of Chinese tourists decreased between 20 and 30 percent compared to last year's Lunar New Year," said an agency official asking not to be named.

Local agencies attributed the falling popularity of South Korea to the soured relations between the two countries over Seoul's decision to install the Terminal High Altitude Area Defense (THAAD) missile system on the Korean Peninsula.

South Korea's southern resort island of Jeju, one of the most popular destinations among tourist groups, was dealt a more severe blow, they said.

The number of Chinese visitors to Jeju is expected to reach 42,800 during the holiday, down 16.6 percent from the same period a year ago, according to the Jeju Special Self-governing Provincial Tourism Association.

Despite the downturn, some agencies reported that a growing number of independent Chinese tourists will eventually have positive effects on the tourism sector.

Earlier, the Seoul government announced that it will develop what it called tailor-made tour programs that will target individual tourists or small groups.

The government said it will also continue to crack down on low-priced, low-quality tour programs that have long been accused of swindling money out of Chinese tourists.

Industry experts said the country's foreign tourism sector got back on track last year due to various favorable factors, such as a weakening Korean currency. In 2016, Chinese accounted for nearly half of all foreign tourists here at 8.04 million. 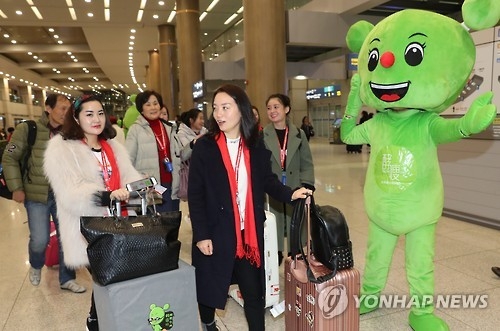