SEOUL, Feb. 1 (Yonhap) -- Former U.N. chief Ban Ki-moon on Wednesday met with key political leaders and spurred efforts to launch a full-fledged campaign team, as he is quickening preparations for a presidential election this year.

Ban, a prominent presidential aspirant, paid courtesy calls to the leaders of the ruling Saenuri Party and its splinter group Bareun Party in the morning. Later in the day, he plans to meet the chief of the minor opposition Justice Party.

His meeting with the political heavyweights came as he is weighing various options to boost his presidential prospects such as joining an establishment party, creating a new party or forming a coalition of like-minded non-mainstream politicians.

Ban, who returned to Korea on Jan. 12 after 10 years of service at the world body, has yet to officially declare his presidential bid.

But he has repeatedly signaled his strong ambitions for the country's top elected office, stressing his resolve to work for a "change in politics" -- a phrase he has repeatedly used in his searing criticism of establishment politicians mired in partisanship and factionalism.

A day earlier, he called for the creation of a consultative body to pursue a constitutional revision before the presidential election, in an apparent move to rally political forces behind him on the divisive issue of rewriting the decades-old basic law.

During a meeting with In Myung-jin and Chung Woo-taik, the interim leader and floor leader of the Saenuri Party, Ban requested their support for his drive for a pre-election amendment of the 1987 Constitution.

"I proposed (the establishment of the consultative body) to push for a constitutional revision," Ban said. "It would be appreciated if the Saenuri Party contributed to the drive." 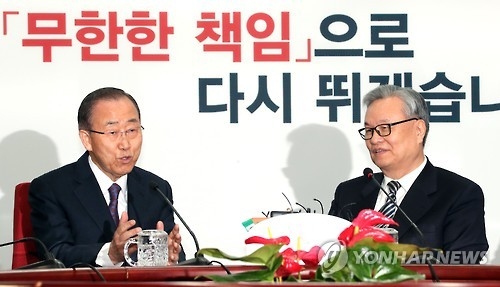 In said he fully agrees with Ban's proposal.

"Our party's stance is that a revision should be made towards a cooperative governance structure and the diffusion of powers (that are currently concentrated in a single leader)," he said.

During the meeting with Choung Byoung-gug and Joo Ho-young, the leader and floor leader of the Bareun Party, Ban called for joint efforts for "grand national integration," a likely central plank of his campaign.

"We have to address all citizens' concerns through cooperative governance and the diffusion of powers," he said. "I will foster grand integration and conciliation." 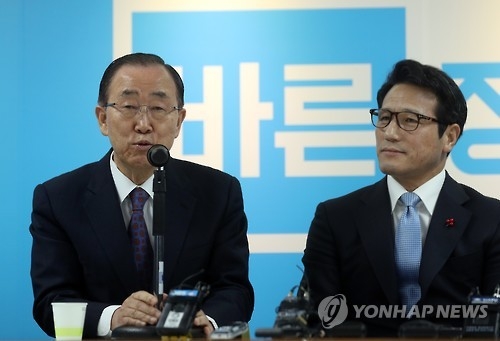 He also stressed the need for the nation to overcome "bad politics" intent on gaining partisan interests and move forward.

"I hope the leaders of the Bareun Party will make active efforts to help the Republic of Korea quickly move beyond its crisis," he added, referring to the leadership crisis triggered by the impeachment of President Park Geun-hye over corruption allegations.

Meanwhile, Ban has reportedly signed a contract to rent a 661-square-meter office in Yeouido, western Seoul, raising expectations that he could launch an official campaign team as early as later this week.

When the team is launched, the list of his key campaigners is likely to be unveiled, observers said.

Yoon Jeung-hyun, who served as the finance minister from 2009-2011, is expected to lead the policy division of the team.

"Yes, discussions have been under way (about me becoming a policy chief on the team)," Yoon told Yonhap News Agency over the phone. "Though I am not sure if I am fully capable of carrying out the role, I am willing to provide help in the economic realm."

Oh Se-hoon, a senior member of the Bareun Party, has also been mentioned as a likely chief campaigner for Ban's team. Oh has recently moved to recruit Ban as a member of the minor conservative party.

Former South Korean Ambassador to China Kwon Young-se is being floated as a likely campaign advisor handling personnel management and other affairs.