The Korea Football Association (KFA) said its president Chung has submitted his candidacy for a seat on the FIFA Council last Thursday to the Asian Football Confederation (AFC).

This is the second time that Chung has placed his bid for the FIFA Council seat. The 55-year-old came up short in the 2015 election.

The FIFA Council, which replaced the FIFA Executive Committee last year, has 37 members, with 12 newly created seats allocated to six confederations. The AFC, which was given three additional seats, originally planned to hold the election in last September to select the members, but it was postponed to May this year.

Chung registered as a candidate for the September election, but pulled out of the race in July after he was named chef de mission for South Korea at the Rio de Janeiro Summer Olympics. Chung then cited the need to focus on leading South Korean athletes at the Olympics.

The KFA said Chung decided to take a second crack at winning a seat on the FIFA Council as the AFC election doesn't interrupt his other schedules and there are now four seats available to Asia, with Olympic Council of Asia President Sheikh Ahmad Al-Fahad Al-Sabah's term as FIFA Council member ending before May.

"Because of the election postponement, I've got an opportunity to run for the seat again," Chung said through the KFA. "I will meet with various football officials in Asia and explain my vision and sincerity for the development of football."

Under the election rule, at least one of the four seats must be filled by a woman, meaning Chung must finish in the top three among male candidates. It is still unknown who will compete with Chung in the election, the KFA said.

Chung, chairman of construction giant Hyundai Development Co., is a veteran sports administrator. He has been at the helm of the KFA since 2013. Previously, he was the commissioner of the K League, which operates domestic professional football competitions. 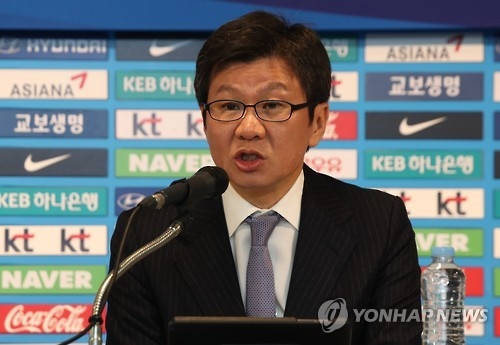