SEOUL, Feb. 1 (Yonhap) -- President Park Geun-hye's lawyers asked the Constitutional Court Wednesday to summon 15 more witnesses to her impeachment trial, a move critics have denounced as an attempt to stall the proceedings.

Lee Joong-hwan, an attorney for Park, requested during the 10th hearing that the court call 15 people including Choi Soon-sil, the woman at the center of an influence-peddling scandal that led to the president's impeachment.

"Please accept the request to allow for a fair battle," Lee said. "We will do our best to keep the questioning short so as not to hamper swift proceedings." 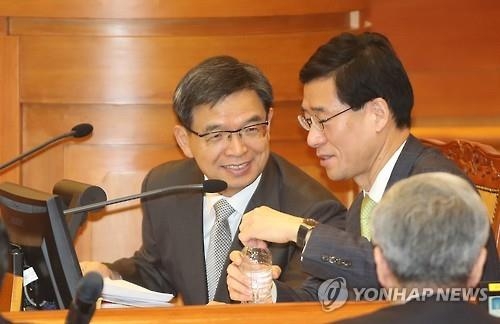 Choi, a close friend of Park, was summoned to the court last month to testify during the fifth hearing.

Last month, the lawyers also sought the summons of 39 witnesses in addition to those who had already testified, drawing strong criticism for trying to hold up the trial process. The court accepted 10 and rejected the rest.

Park has been seen as trying to delay proceedings to rally her core supporters. After March 13, chances are also higher that the court will reject her impeachment as acting chief justice Lee Jung-mi is set to retire on that day, reducing the number of justices on the nine-member bench to seven. Chief Justice Park Han-chul's retirement on Tuesday already reduced their number to eight.

Park's ouster requires the endorsement of at least six justices.

Lee said his team may request the summons of two more witnesses in the future, but declined to identify them.