SEOUL, Feb. 1 (Yonhap) -- An American business body in Seoul said Wednesday that South Korea and the United States should make efforts to create a mutually beneficial relationship by improving the terms of their free trade pact, stressing that 2017 is a monumental year in the relationship between the two with a new president in the U.S. and a leadership change also expected in South Korea.

South Korea and the U.S. implemented their bilateral trade pact, widely known as the KORUS FTA, in 2012, but there have been recent concerns here that the U.S. government under President Donald Trump may take what some call protectionist measures, under his slogan, "America First."

During his presidential campaign, Trump even denounced the Seoul-Washington FTA as a job destroyer, hinting that he would seek to revise the terms.

"Now is the time for the key stakeholders in South Korea to truly sell the value of the KORUS FTA on a factual basis while giving our best advice and counsel ... and I believe this could be a win-win partnership between the two countries," James Kim, chairman of the AMCHAM, told reporters.

The KORUS FTA has served both countries well, and the trade pact can be a platform for mutual economic development in the future, he said.

"Given that President Trump is a respected business person with many senior leaders in his administration coming from a business background, we believe a pragmatic and practical approach ... will be received well," he said. 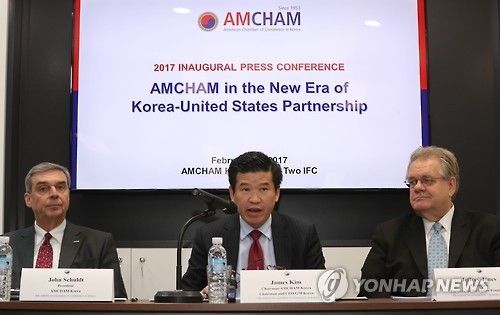 South Korea is the sixth-largest trading partner to the U.S., generating $350 billion in total volume, with two-way trade increasing 84 percent over the last decade and reaching $115 billion in 2015, according to the business body.

"Actually, exports to the U.S. of non-FTA benefited products, such as steel, semiconductors and autos, rose by 7.9 percent, and at the same time, the U.S. actually enjoyed a trade surplus in services leading the way, Kim said.

But it needs to improve the terms and conditions of the KORUS FTA, and both countries should make efforts to well implement the trade pact, AMCHAM said.

Jeffrey Jones, a former AMCHAM chairman, said both countries have made tremendous progress on the certificate of origin and other areas, but there are still outstanding concerns over environmental and other regulations.

"For example, there is still a discriminatory policy in place that favors domestic (credit) cards over international (credit) cards," Jones said.

Kim also commented that South Korea has unique standards that hamper domestic and foreign companies from going global and being more competitive.

"Korea is one of the few countries where you really cannot access Google maps," Kim said. "We need to make the Korean economy more transparent and predictable by making the regulatory process more deliberative and by seeking increased interaction with stakeholders when designing new policies."

In regard to the potential renegotiation of the KORUS FTA, Jones said South Korea doesn't need to be concerned.

"I don't think we are concerned about the renegotiation, but we do believe that both countries will seek to improve the terms and the conditions of the FTA as related to the benefits that can be achieved by both countries," Jones said.

"We can expect the Trump administration to begin the discussion with Korea on improving the FTA, and I think we will see some efforts to improve the FTA, but I think that it is a positive development for Korea, and it will improve Korean companies' access to the U.S. economy."