SEOUL, Feb. 1 (Yonhap) -- Germany, Italy and Poland have refused to issue visas to students from a North Korean university in compliance with the U.N. Security Council's sanctions resolution on the North, a U.S.-based media said Wednesday.

Pak Chan-mo, an honorary president of the Pyongyang University of Science and Technology, said in an interview with Voice of America (VOA) that the university's students have been unable to leave for the European countries due to the visa issuance refusal.

"We are considering ways to send them to Brazil, Russia or China rather than Europe down the road," Pak was quoted as saying.

According to VOA, the students gained admission to universities such as the University of Gottingen in Germany and the University of Sannio and University of Brescia in Italy, but their plans to study abroad fell through due to the governments of these countries refusing to issue them student visas.

In an email to VOA, the German foreign ministry said it is a basic rule for the German government to receive North Korean students in areas of study where the two countries have a mutual understanding. The ministry, however, has decided not to accept North Korean students in particular fields of study that might help the North's development of nuclear weapons, missiles and weapons of mass destruction.

In March last year, the U.N. Security Council adopted a resolution subjecting North Korea to the harshest round of sanctions ever after it carried out its fourth underground nuclear test in January and launched a rocket using ballistic missile technology the following month.

Under the U.N. Security Council Resolution 2270, U.N. members are required to not provide North Koreans with education and training related to nuclear and missile development. 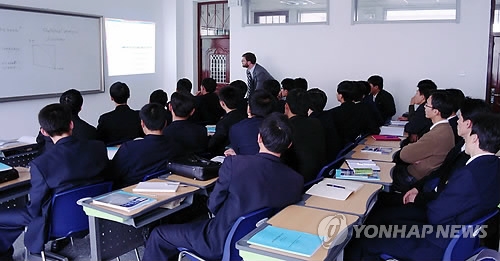 Pak also said the imposition of the sanctions has put the university in dire straits, as it has received fewer donations than ever and faced difficulties in hiring professors.

The university, which opened in 2009 after being jointly set up by North and South Korea, attempted to implement a plan to establish a medical college last year. But the financial difficulties compelled the school to ditch the plan.

"The opening of the school is virtually shelved as we have no remittances and ways to secure medical equipment due to the U.N. sanctions," said Ro Dae-yong, chief of the planned medical college.