DAEJEON, Feb. 1 (Yonhap) -- A court has accepted a request for a stay of execution on a ruling to hand over a stolen Buddhist statue to a local temple that has been claiming ownership of the relic, until the verdict is confirmed by a higher court, prosecutors said Wednesday.

The Daejeon District Court on Thursday ruled in favor of Buseok Temple, which filed a lawsuit against the Seoul government in April to take over the statue that was stolen by Korean thieves from Kannon Temple in Japan in October 2012.

The temple has been claiming that the statue, currently preserved at the National Research Institute of Cultural Heritage, was initially plundered from its grounds by the Japanese.

The thieves were arrested a few months after they committed the crime and the South Korean authorities retrieved the statue. Since then, there has been controversy over whether to return it to Japan or to Buseok Temple.

After years of dispute, the court acknowledged the Korean temple's ownership of the statue and ordered the government to immediately hand it over to the plaintiff regardless of whether an appeal is filed over the case or not.

The prosecution appealed the ruling and sought an injunction to temporarily suspend its execution.

"The latest injunction order took into consideration the risk of robbery, harm, and the possibility of a higher court overturning the decision, as well as the diplomatic issues with Japan," a prosecutorial official said.

Wonwoo, the chief monk at Buseok Temple, said he will consult with his lawyer and take the necessary legal measures.

The statue will be kept by the government until the final ruling is made.

The 50.5 centimeter-tall statue is presumed to have been made in the early 14th century during the Goryeo Dynasty (918-1392) and was designated by the Japanese prefecture as a cultural asset in 1973.

It was one of the two statues stolen by the thieves. The other was returned to Japan in July 2015 after South Korean prosecutors concluded that they could not confirm if it was illegally taken to the island nation. 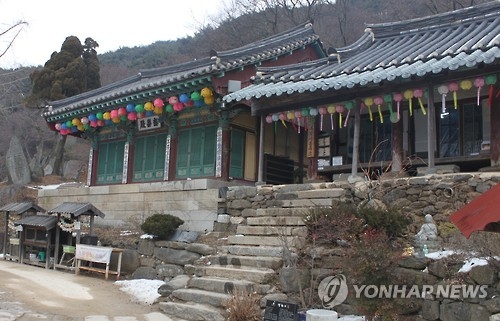