During a general meeting of its lawmakers, Saenuri said the display was an act of insult against women and thus can be considered as a sexual harassment.

Last month, Rep. Pyo Chang-won of the Democratic Party organized an exhibition at a lawmakers' building in the National Assembly complex. It featured "Dirty Sleep," which depicted Park lying naked in a parody of Edouard Manet's "Olympia."

The Saenuri lawmakers also claimed Moon Jae-in, a potential presidential candidate from the main opposition, should also be held responsible as he recruited Pyo before last year's parliamentary elections.

The Democratic Party for its part referred Pyo to its ethics panel, with its floor leader claiming that organizing such an exhibition is a "punishable act."

Pyo drew criticism earlier this year by claiming that there should be an age ceiling of 65 for presidents, apparently targeting former U.N. Secretary-General Ban Ki-moon, a potential conservative candidate. 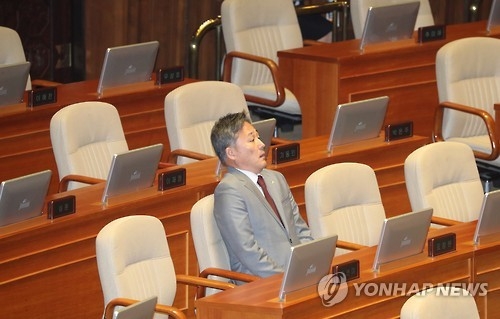