During the meeting with South Korean lawmakers from the intelligence committee, former Republican lawmaker Matt Salmon said the THAAD battery will play a key role in enhancing Seoul's defense capabilities against Pyongyang.

The THAAD system has been at the center of controversy over the past several months, as the opposition lawmakers claimed the deployment will adversely impact on Seoul's relationship with Beijing, which has expressed concern over the rising presence of U.S. military in Northeast Asia.

John Doolittle, also a former Republican lawmaker, said the THAAD system can not only effectively curb North Korea's provocation, but can also send a strong message to China.

Christopher Hill, who served as Washington's envoy to Seoul, followed suit and claimed the THAAD system is one of the world's best defense systems.

Rep. Kim Byung-kee of the main opposition Democratic Party of Korea, however, said although Seoul and Washington have such common ground in seeking the denuclearization of North Korea and eradicating its missile threats, the two may have different views on approaching the issue.

Rep. Cho Eung-chon of the same party argued the United States has not yet provided details on the effectiveness of the THAAD system in dealing with Pyongyang's nuclear threats.

"For South Koreans, there is lack of clarity in regards to THAAD. But China's economic retaliation is a realistic threat," Cho said.

In response to the remark, Salmon said China is unlikely to protect South Korea when Pyongyang actually makes nuclear provocations. He then said that U.S. can offer protection for Seoul. 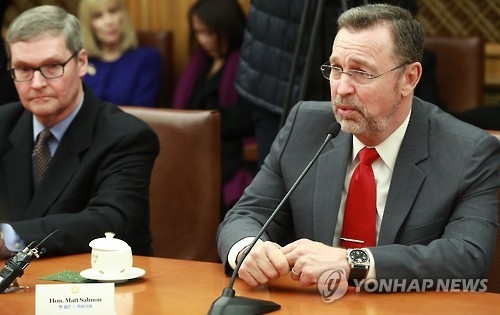