The U.S. giant sold about 78.3 million smartphones during the October-December period, up 18 percent from a year earlier, the data compiled by industry tracker Strategy Analytics showed. The figure translates into a market share of 17.8 percent.

The South Korean tech giant, meanwhile, shipped 77.5 million units during the cited period, down 5 percent from a year earlier, taking up 17.17 percent of the market.

Earlier in the day, Apple announced it sold a record 78.29 million iPhones during the October-December period, up 5 percent from a year earlier.

Strategy Analytics said Apple overtook Samsung as the South Korean tech firm has been grappling with the recent recall of its flagship Galaxy Note 7 over faulty batteries.

For all of 2016, however, Samsung maintained its global leader position with 22.2 percent market share by shipping 309.4 million smartphones, followed by runner-up Apple with 16.1 percent, the data showed.

Three Chinese vendors -- Huawei Technologies Co., Oppo and Vivo -- followed Apple and Samsung in the top five, with Huawei leading the pack with a 10 percent market share during the same period, the data showed. It marks the first time that Huawei has posted double digit market share. 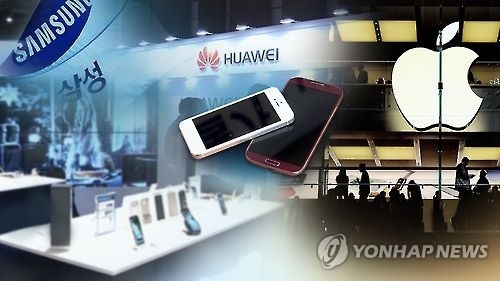