His exit from the presidential competition is likely to embolden the current front-runner Moon Jae-in of the main opposition Democratic Party and leave conservative parties scurrying to find his alternative.

"I will give up my pure aspirations to achieve a change in politics under my leadership and unify the country," Ban said during an impromptu press conference at the National Assembly.

"I was very frustrated by (some of the political circles') parochial, selfish attitudes and reached the conclusion that it is meaningless to move forward with them," he added. 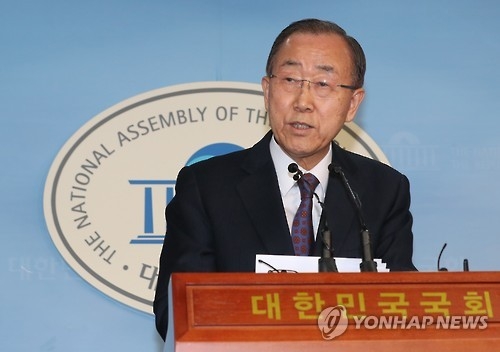 Ban did not formally announce his presidential bid, but indicated a strong willingness to run in the election even before his return to Korea on Jan. 12 after 10 years of service at the world body.

His presidential hopes have faltered due to continued political attacks from opposition parties and progressive media as well as corruption allegations involving himself and his relatives.

During the news conference Ban heaped opprobrium on those who have attacked him through what he called slander and "fake" news reports.

"Over the short period of the last three weeks, I have talked about my ambitions to achieve grand national integration by unifying divided public opinion," he said.

"But my pure patriotism and ambitions, along with my cause for change in politics, have dissipated due to slander close to personality murder and various fake news reports."

Ban added that his erstwhile presidential ambitions have left a "big scar" on himself, his family and the honor of the United Nations where he served as secretary-general from 2007-2016.

"I will not give up my dream and vision," he said, adding he will devote his experience at the international organization to helping brighten the future of his home country.

Ban's decision to drop out of the race was a dispiriting setback to the conservative camp that has sought to recruit him as its standard-bearer in the presidential election later this year.

It is bound to benefit Moon, a former leader of the main opposition Democratic Party, who has maintained a lead in various recent opinion polls.

A local magazine has reported that Ban received around US$230,000 from Park Yeon-cha, a local businessman, while serving as South Korea's foreign minister in the 2000s. Ban has called the report ill-founded and threatened to take legal action against the magazine.