SEOUL, Feb. 1 (Yonhap) -- The director and the leads for the Korean action film "Fabricated City" met with the press and shared their thoughts after watching the film screening for the first time at the event.

Stars Ji Chang-wook, Shim Eun-kyung and Ahn Jae-hong on Tuesday attended the event held at CGV-Wangsimni theater in Seoul where they expressed their gratitude to director Park Kwang-hyun for the lushly produced flick, which fused dynamic action scenes with comical and imaginative elements. They also asked the audience to look forward to the movie's premiere on Feb. 9.

In the upcoming film, Ji plays Gwon-yu, a jobless young gamer who is jailed after being framed for murder but is determined to unearth the truth with help from other members of his online gaming group. His role marks his silver screen debut. Actress Shim of the 2013 box office hit "Miss Granny" and Ahn of the popular television series "Reply 1988" play the two other gamers named Yeowul and Demolition.

Director Park, best known for his hit comedy-drama film "Welcome to Dongmakgol" (2005), hopes many young moviegoers would empathize with the flick as it bears a close resemblance to Korea today featuring Google's AlphaGo AI program and a plethora of cyberspace hackers. 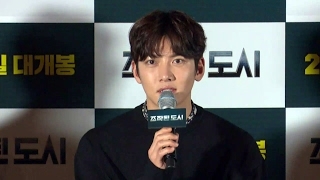