The Korea Baseball Organization (KBO) said Jeong, an All-Star for the domestic club Hanwha Eagles, delivered the news earlier in the day. South Korea will host the first round of WBC action in Seoul on March 6.

Jeong, 34, has been one of the KBO's premium defensive second basemen. The career .303 hitter enjoyed his best offensive season in 2016, batting .301 and setting career-highs with 18 home runs, 88 RBIs, 121 runs scored, 178 hits and 31 doubles. He also swiped 22 bags, becoming the first KBO player to steal at least 20 bases in 11 consecutive seasons.

Jeong had surgery to repair a damaged meniscus in his left knee in November, and the Eagles said at the time Jeong would require two to three months of rehab.

"Everyone wants to play for the national team, but you have to be completely healthy to represent the country," Jeong said. "I am sorry and disappointed that I won't be able to do that."

Jeong's absence will leave a big hole in the lineup, on the field and in the club house. Jeong has been a national team mainstay for a decade and was the captain of the team that captured the inaugural Premier 12 tournament in fall of 2015. 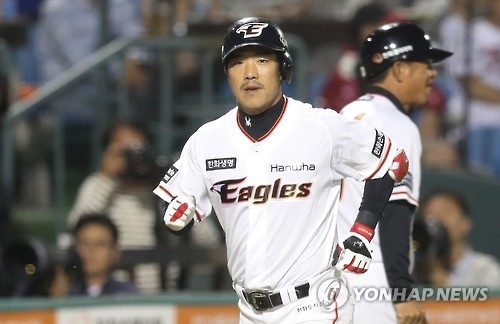 Another KBO star, Oh Jae-won of the Doosan Bears, will take Jeong's spot on the 28-man roster. Oh is a speedster better known for his defense than power at the plate. He is one of two second basemen on the national team, alongside Nexen Heroes' Seo Geon-chang, the 2014 KBO MVP.

The deadline to finalize the roster is next Tuesday and teams can make changes as necessary until then.

Jeong is one of several veterans to miss the WBC because of injuries. Two KBO pitchers, Kim Kwang-hyun of the SK Wyverns and Lee Yong-chan of the Bears, both underwent elbow surgery and were dropped from the provisional roster. Ryu Hyun-jin, left-hander for the Los Angeles Dodgers, was never considered since he's rehabilitating from shoulder and elbow surgeries that have limited him to one start over the past two seasons.

On the offensive end, Park Byung-ho of the Minnesota Twins was also left off, following right hand surgery last fall. Texas Rangers' outfielder Choo Shin-soo, who missed 114 games last year with assorted injuries, won't be available after the tournament organizers granted the club's wish to keep him out of the competition.