Sales at home totaled 35,012 cars for the month, down 9.1 percent from the same month last year, according to the country's second-largest carmaker. Overseas sales came to 163,793 cars, down 6.5 percent from a year earlier. Kia's global sales in January fell 7 percent on-year to 198,805 units.

The number of factory working days, lessened by the Lunar New Year holiday that fell at the end of January coupled with the outdating of the K3 compact, dampened sales at home, Kia said. Brisk demand for the All New minicar Morning, midsize sedan K7 and SUV Mohave eased the sales fall, with the Morning selling 5,523 units to become January's bestseller for Kia.

The automaker, a sister firm of Hyundai Motor, said the slowdown in overseas sales has to do with fewer production days and the company concentrating more on launching new models than on marketing abroad.

"January performance is somewhat weak, but generally, it is an off-peak season," a Kia official said. "We will reach the sales target that we set at the start of the year with our new cars, including the Morning, premium sports sedan Stinger and compact SUV."

The company is scheduled to launch three new models in China, including the midsize SUV KX7. 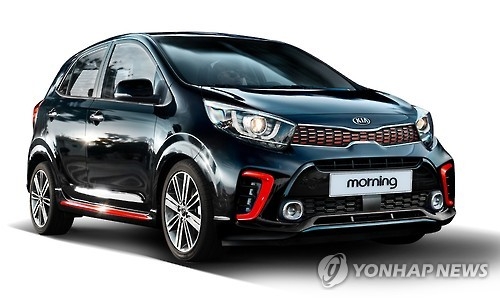