ICHEON, South Korea, Feb. 1 (Yonhap) -- The city of Icheon, south of Seoul, held an event on Wednesday to mark the first-known rice planting of the year in South Korea amid a cold spell, claiming the title for the 30th consecutive year.

A group of people including Icheon Mayor Cho Byung-don took part in the event in which they planted early-ripening rice in two greenhouses in Icheon, a city in Gyeonggi Province, three months before May when rice planting is usually done in other regions of the country.

Icheon, a major production base for quality rice known as "Gyeonggi Rice," conducts the event every year to promote the rice.

The people, including farmers and representatives of an agricultural cooperative, transplanted rice seedlings by hand before enlisting use of a rice-planting machine to finish the job. In preparation for the event, the Hobeop Agricultural Cooperative in the city soaked the rice seeds for pre-germination on Dec. 29 before sowing them two days later to grow rice seedlings. 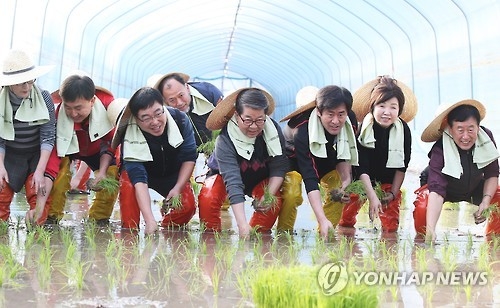 The harvesting of rice from the greenhouses is due in late May, with the rice yield expected to reach 320 kilograms.

According to city officials, the growing of rice seedlings is attributed to the use of waste heat from a garbage incineration plant that is directed into the greenhouses. Growing enough seedlings to plant requires keeping the temperature at 20 C. To help with the rice crop, the municipality connected a 1-kilometer pipeline of water warmed by the waste heat from the incineration plant to the rice paddy where the greenhouses are located.

Mayor Cho said the event "is to make known the superiority of Icheon rice and represent our farmers' resolve to grow it as the country's the best strain of rice."

Last year's event was held on Feb. 1 and the municipal government plans to hold it on the same day next year.