SEOUL, Feb. 1 (Yonhap) -- South Korea's ruling and opposition parties on Wednesday both expressed shock over the unexpected withdrawal of the presidential bid by former U.N. Secretary-General Ban Ki-moon, who had been one of the leading potential contenders in this year's race.

Ban, who was way ahead of other conservative figures in local opinion polls, was widely expected to run for the presidential election. He was virtually the only threat to Moon Jae-in, a front-runner potential candidate from the main opposition Democratic Party.

The former U.N. head's withdrawal especially came as a shock to local conservative parties, which have been making efforts to recruit him ahead of the presidential election.

"We hope (Ban) will make contributions to the people based on his experience as the secretary-general of the U.N.," Rep. Kim Sung-won, the spokesman of the ruling Saenuri Party, said, but added his withdrawal was "shocking" and "regrettable."

Kim said South Korea's political realm has lost a great asset by defaming Ban, which could be considered a "murder of dignity." The former U.N. chief had to defend against several allegations involving himself and his family.

During the announcement, Ban said he was "frustrated" by the "parochial and selfish attitudes" of local political circles.

Since Ban hinted at running for the presidency after returning home this year, the opposition bloc has been demanding he prove his capabilities as a potential candidate.

The Bareun Party, which spun off from the ruling Saenuri Party, said it respects Ban's decision.

"Although we are shocked, we respect his vision on political reform," Rep. Chang Je-won of the splinter party said. "Although Ban announced his withdrawal from the race, I hope he will still be with the Bareun Party in seeking new politics."

Chang added the party will continue to sustain its vision to reform the conservative bloc.

"We respect the decision. The people's voice currently call for a change of government. We reiterate the people want to eradicate deep-rooted evils and make a new country," Rep. Youn Kwan-suk said.

Others said that while people wished Ban to remain a respected elder politician, he volunteered to be tested as a presidential candidate. They speculated that Ban, when confronted with the harsh nature of politics and the grave responsibility of being the country's leader, opted not to pursue his ambitions. 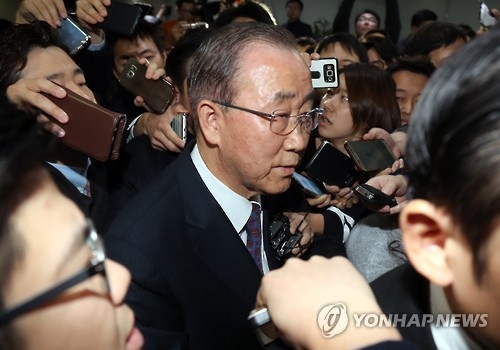