SEOUL, Feb. 1 (Yonhap) -- South Korea's largest carmaker Hyundai Motor managed a 1.3-percent increase in global sales in January from a year ago, the company said Wednesday, while its performance at home slackened.

The new Grandeur sedan, launched in November, pulled up sales as the company's bestseller in January at 10,586 units. As of the end of last month, the sedan's cumulative sales reached over 56,000 units.

The traditionally popular Avante (5,064 units) and Sonata (3,997 units) followed in the ranking.

The luxury Genesis line fell out of favor, shedding 5.5 percent in sales compared to January last year to 4,195 units.

"We expect the stunted market growth in advanced countries to become more manifest this year," a company official said. "We will answer actively to customers' needs by strengthening the marketing of our main models and strategic lineups." 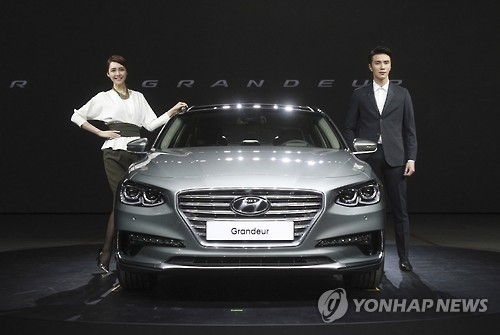