SEOUL, Feb. 1 (Yonhap) -- Seven out of the 10 most expensive houses in South Korea are located in the popular foreigner-heavy neighborhood of Itaewon in the heart of Seoul, government data showed Wednesday.

Among them, Lee Myung-hee, chairwoman of South Korea's retail giant Shinsegae Group, owns the most expensive house, according to the survey by the Ministry of Land, Infrastructure and Transport.

Lee's 2,862-square-meter house in Itaewon is valued at 14.3 billion won (US$12.3 million) in terms of the government-posted price, which usually stands at 67 to 68 percent of the market price. Itaewon, located near the U.S. military's Yongsan Garrison, is one of the most popular areas in South Korea. 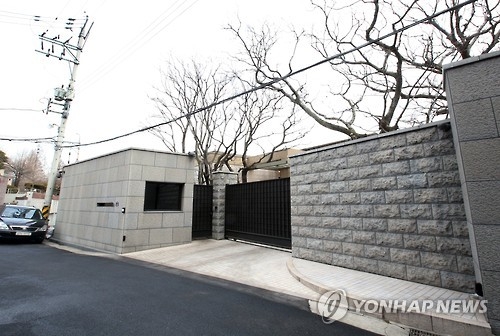 In comparison, the cheapest home in the country is 942,000 won, located on a remote island off the country's southwestern town of Yeonggwang.

Every year, the ministry assesses the prices of 220,000 out of 4.18 million houses across the country before making public the prices of what are called reference houses.

Prices of reference houses serve as a key factor in estimating the value of individual homes.

Lee is a younger sister of Samsung Electronics Chairman Lee Kun-hee, who has been hospitalized since May 2014.

Prices of individual houses are set to be announced in late April every year.

7 out of Seoul's 10 most expensive houses located in Itaewon

7 out of Seoul's 10 most expensive houses located in Itaewon